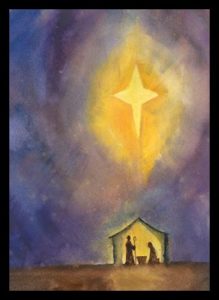 Even in modern, secular Britain there is one tradition that still holds sway at Christmas – The Christmas Nativity Play.

Proud parents gather to watch thieir offspring perform the story of Christ’s birth – although often with some ‘creative licence’ so that every child has a part to play, be it as one of the ’20 shepherds’, ’10 wise men’, a zebra or teletubby attending the birth of our Lord.

The tradition goes back nearly 800 years and it’s St Francis of Assisi we have to thank when he sought to recreate the birth of Christ, in Italy on 25 December 1223.

Today the town of Greccio, in the Apennines in central Italy, is a sleepy sort of place. But at Christmas 1223, it welcomed one of the best-known men in the medieval world: Francis of Assisi, Catholic friar and founder of the Franciscan order. And it was Francis who decided that Greccio should put on the worlds first nativity scene.

Then in his early forties, Francis was keen to remind the people of Greccio that there was more to Christmas than fancy food and fine gifts. Then, as now, people often lamented that the true meaning of the festival had been lost. So he determined to …


“commemorate the nativity of the Infant fesus with great devotion [and] all possible solemnity”, and adamant that there must be no hint of “lightness or novelty”

To that end Francis asked Pope Honorius III for permission to put on a little show for the people of Greccio, which he duely agreed to.


Francis had been to the Holy Land a few years earlier, and may well have been inspired by the sites associated with the Gospels. According to St Bonaventure he …

“prepared a manger, and brought hay, and an ox and an ass to the place appointed”

Then, as midnight approached on Christmas Eve…

“the brethren were summoned, the people ran together, the forest resounded with their voices, and that venerable night was made glorious by many and brilliant lights and sonorous psalms of praise”


The nativity scene was a huge hit. From then on, there was no looking back.