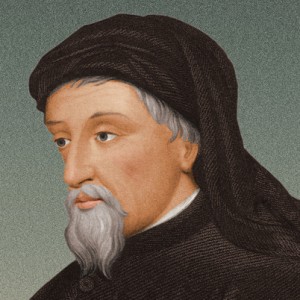 – The answer is not really – but he DID do a lot to help turn it it what we associate it with today.

HOWEVER Valentine’s Day only became associated with romantic love during the late fourteenth century, when Geoffrey Chaucer (c. 1343-1400), author of The Canterbury Tales, made the association in his poem ‘The Parlement of Foules’, written some time in the 1380s, possibly in 1382. The poem features a parliament, or assembly, of birds, which have gathered together in order to choose their mates. As Chaucer’s narrator remarks,

‘For this was on seynt Volantynys day Whan euery bryd comyth there to chese his make.’

However, several of Chaucer’s contemporaries also wrote poems about Valentine’s Day as a day for lovers. Chaucer was perhaps merely the poet who popularised this new fashionable notion, although there is some evidence to suggest that Chaucer was probably writing slightly earlier than most of the other poets.

But when was Valentine’s Day in Chaucer’s poem? Today we’d assume Chaucer was referring to 14 February, but mid-February is an unlikely time of year for birds to mate, at least in England. Artistic licence is obviously a factor here.

So perhaps Chaucer ‘invented’ – or at any rate helped to popularise – Valentine’s Day as a day of love and romance. It’s just that he possibly had a different date marked on his calendar for Valentine’s Day.