Guernsey’s Liberation Monument – A Fusion of Art and Science 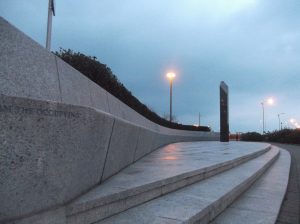 In the summer of 1994 the States of Guernsey commissioned the design for a new Liberation Monument, to commemorate the 50th Anniversary of Liberation from the German occupying forces in 1945.

The result is a truly amazing fusion of art and science. On the 9th May each year the shadow from the needle-like monument falls across a bench recording the events of that day at the exact same time they occurred.

Several artists were invited to put forward suggestions. The artist eventually invited to realise this commission was Guernseyman Eric Snell, whose parents had lived through the 5 dark years of German occupation.

The brief handed to him was that he was to take into consideration, and to incorporate where possible, the following:-

Genesis of an Idea

The brief didn’t include any notion of a sundial. It was whilst studying the site where it now stands that Snell saw his own shadow stretched out before him.

“I was taking photographs of the site, and it was a very sunny day in June, I was irritated by the fact that every shot I seemed to be taking included my shadow … At first I was annoyed, thinking that these shots were not very professional, but then I started to think about the idea that maybe a shadow cast by an obelisk would have the same length and direction on 9th May in 1945, also 1995 and beyond. I liked the idea, but how was I going to realise this idea, and how was I going to verify that the shadow would indeed be consistent?”

It was this simple observation that was the starting point for the monument that exists today.

“I contacted Dr Peter Andrews at the Royal Greenwich Observatory, Cambridge. .. . He believed that the shadow would remain consistent from one year to the next, with the shadow length deviating by only a few millimetres each year.”

Snell was now confident that he could now develop this idea — but how?

Snell went to the Liberation Monument Joint Working Party, with his idea to create a central obelisk designed and positioned in such a way so that, on the 9th May each year, the tip of its shadow, cast by it would fall on the curved stone seating throughout the day on which would be inscribed a record of the major events that happened in Guernsey on that day in 1945. The Monument would ‘come into its own’ on the 9th May each year.

The reaction from the Working Party was very positive and in September 1994 the States approved the project and local astronomer David Le Conte was invited to assist Snell with the astronomical calculations.

after aiming for a tolerance better than about 15 seconds in time, an accuracy of about 5 seconds was in the end achieved

For months Snell & Le Conte worked very closely together – Snell in his studio drawing and revising plans, making models and visiting granite works in France, while Le Conte worked on the calculations, both carried out lengthy and detailed experiments to translate the artistic and mathematical concepts into a physical reality.

Le Conte wrote a computer program called SunShadow to perform the necessarily calculations, even including corrections for atmospheric refraction.

He initially aimed for a tolerance of about 15 seconds in time between when the shadow would fall on the text and the actual time it occurred – in the end though a staggering accuracy of about 5 seconds was achieved.

Even the shape of the tip of the obelisk had to be taken in to account as it would affect the appearance of the shadow and therefore accuracy of the monument. This was evidently going to be extremely complex, and it was concluded that it could only be determined by experimentation.

A life-size model of the top metre of the obelisk was created, with the top few centimetres shaped in plaster. Experiments were carried out on the bowling green at Beau Sejour Centre – the flattest area available. This exercise was necessarily done in the winter, and the low altitude of the Sun, compared with May 09, did not help. However, sufficient data was gathered to establish a probable best shape.


The Path of the Tip of the Shadow 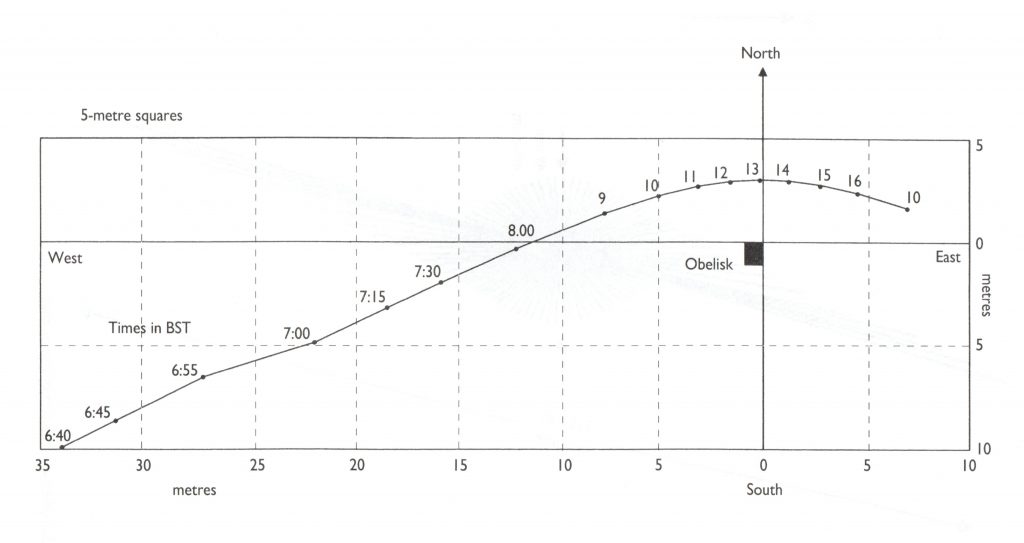 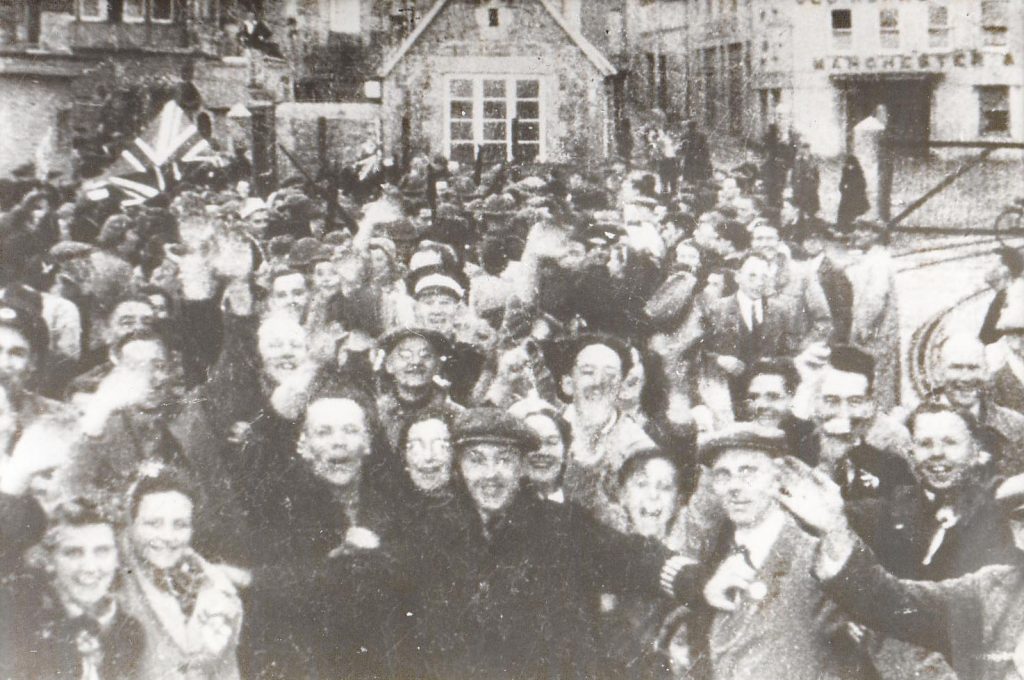 The Archives Service of the States Heritage Committee have a copy of the surrender document in that shows 0715 as the time of the signing.

An important decision was what time to use, GMT, BST or the times in use in 1945. At the time of liberation, in 1945, the British Forces were actually using Double Summer Time. (ie GMT + 2 hours), whilst the time in the island was, by order of the Germans in July 1940, to be set to be German time (ie GMT + 1 hour).

BST was selected as the most appropriate time system, so that the times shown on the Monument would relate to the time in use at the unveiling on the 9th May 1995.

The Shadow in Future Years

In view of the fact that the Liberation Monument may well last several hundred years, SunShadowwas used to calculate the shadow length and azimuth for a period of over 500 years. The results are shown below 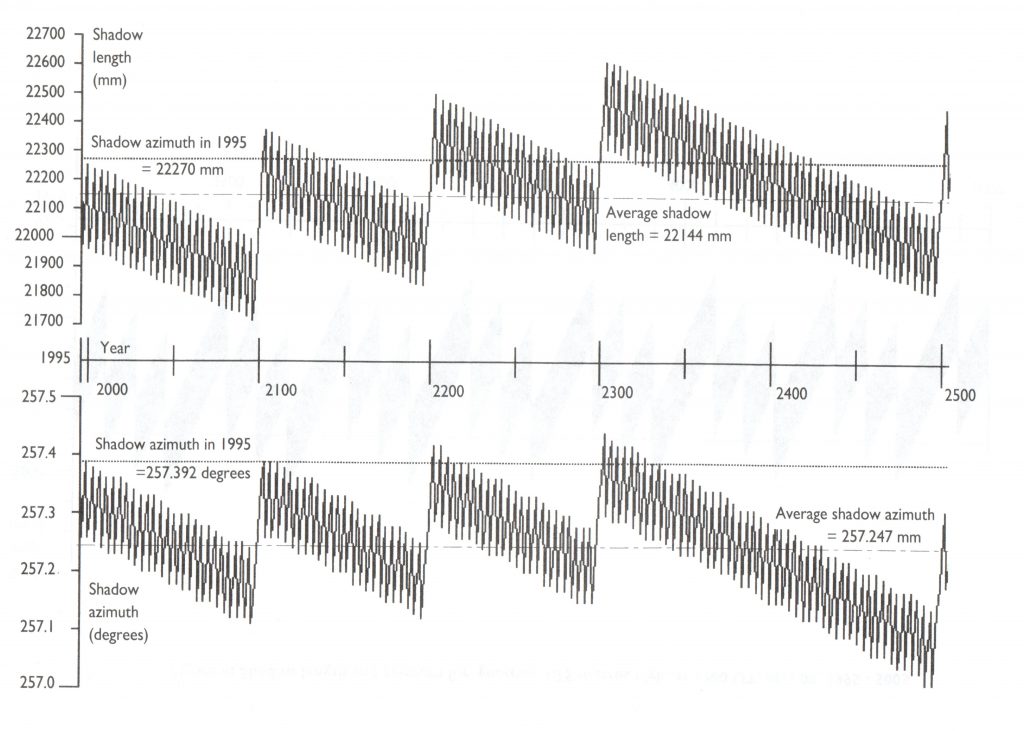 Schema of the top of the Obelisk 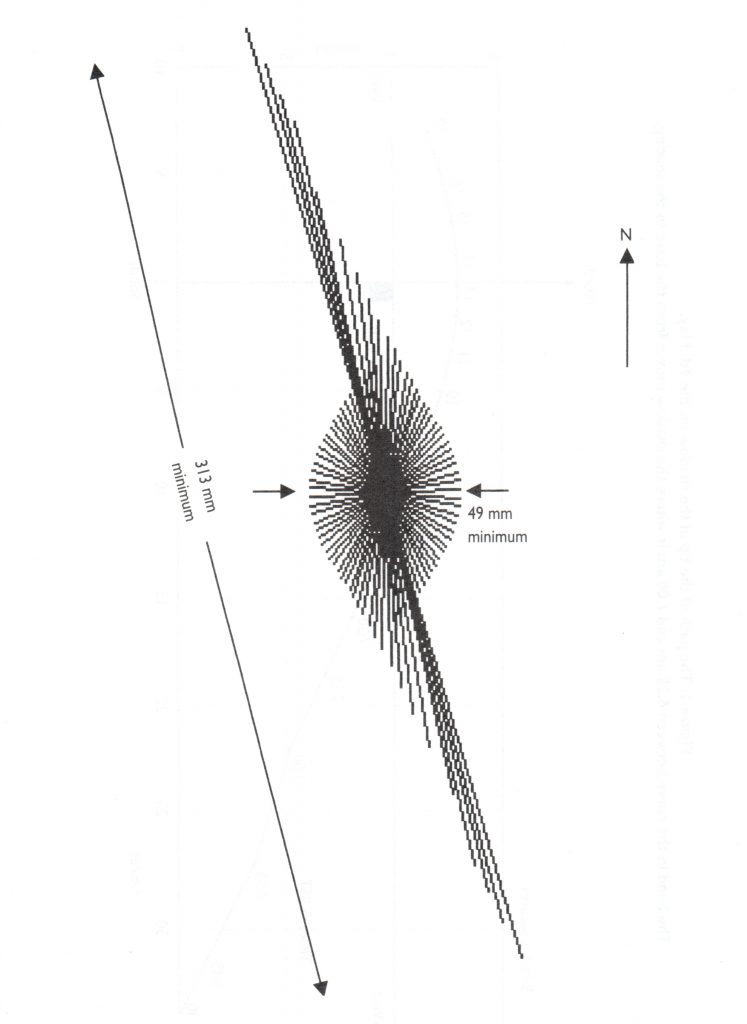 The construction phase lasted from November 1994 until May 1995, whilst continuing concurrently with the experiments we discussed earlier. Unfortunately no new Guernsey granite of suitable quality could be found so it was decided that the obelisk would have to be manufactured from second hand stone. The design required 50 sections of polished local granite of the darkest possible colour, 1 for each year of liberation.

In the end the former White Rock copings, which had been removed during the construction of the North Beach marina development, were deemed suitable. The required sections were cut from these copings.

The design for the seat, on which the events were to be recorded, and the paving called for the granite of the lightest possible colour and so French granite known as Blanc Berrocal was chosen.

shortly before 7.00 am, it was right on course, and progressed exactly as planned along the line of seating

Early on the morning of the 9th May 1995, a small group, including all those involved in its design and construction, gathered to observe the shadow’s progress. Tensely they waited. A final washing of the Monument made the early shadow difficult to discern, but when it did appear, shortly before 7.00 am, it was right on course, and progressed exactly as planned along the line of seating, pointing to each inscription in turn. Seeing the tip of the shadow trace out the predicted path, it was almost as if the shadow itself was tied to the seating. 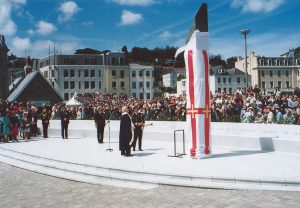 At 1.40 pm, in front of thousands of people. His Royal Highness, the Prince of Wales, unveiled the Monument, to the accompaniment of a fly-past of military helicopters.

The Monument continues to serve both its commemorative function and its utilitarian one, a popular spot for people to sit and enjoy the sunshine, and occasionally the shadow.


The marriage of science and art is what makes this monument so unique.