One mile northeast of St Peter Port and accessible only by boat lies an iconic oval structure made of Herm granite – Brehon Tower. It dominates the Little Russel between Guernsey and Herm and is so much a part of the local scenery that it can be taken for granted. But how did it come into being and what was its original purpose ? 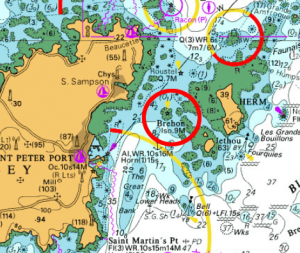 The Brehon rock is part of a reef that barely projects above sea level and has long been a shipping hazard.


It lies in the centre of the Little Russel channel that separates Guernsey from its nearest island neighbour, Herm. It dominates the entrance to the sheltered sanctuary of St Peter Port Harbour on the east coast of Guernsey.

Guernsey and Jersey, along with the other Channel Islands lived, for hundreds of years right on the front line of the seemingly endless wars between Britain and France.

In the 19th century the Brehon Rock became increasingly to be considered of primary importance to Guernsey’s defence against possible French invasion. 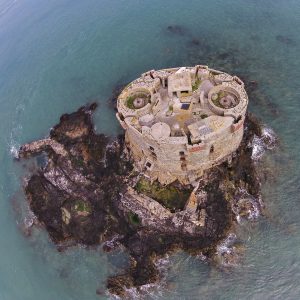 As early as 1803 it was being considered as a defence point when Lieutenant-Colonel J McClean, R.E., reported to Sir John Doyle that a battery had been considered but was, at that time impractical to build. He went on to suggest that a Guard Room, which could also operate as a signal station be built on the rock at an estimated cost of no more than £100. – not an attractive proposition for the men who would have had to be stationed there! However it came to nothing.

In 1842 and again in 1847 the idea was revived again the shadow of an increased threat of French invasion and in response to the extension of fortifications in nearby Cherbourg.

The Construction of Brehon Tower

In 1854 the Crimean War broke out and Britain found itself in the rather novel position of being an ally of France against Czarist Russia, however relations between France and Britain remained guarded.

Fortification of the Channel Islands continued apace. Many of Alderney’s most prominent fortifications such as Forts Tourgis and Clonque were completed along with strengthening of sites in Guernsey, such as Forts Le Marchant, Richmond, Saumarez and Doyle at this time.

It was in this political climate that thought was given once again to protecting the Little Russel and a decision was made to fortify the Brehon Rock. 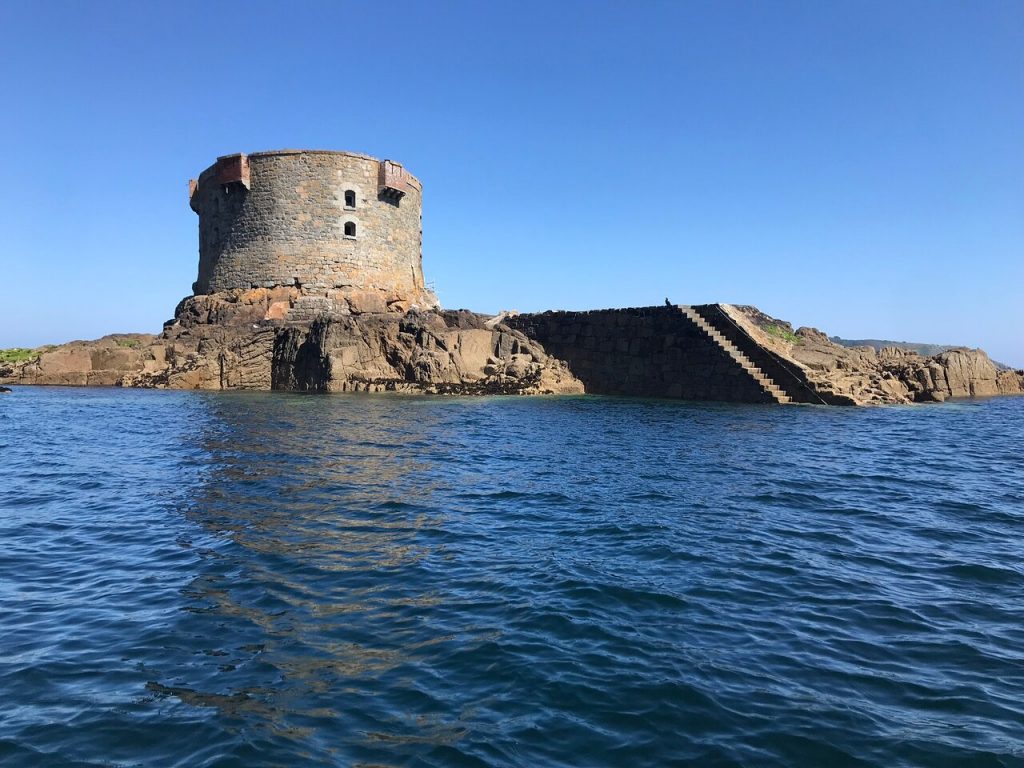 There are two internal floors.

A spiral stone staircase provides access to the flat roof where the original mountings were located for the cannon.

A small building on the roof contained the sidearms shed, expense magazines and a furnace for heating shot.

Powder and shot were raised through the tower by means of a small crane.

Tenders for the project were invited in the local press in May 1855 and work began the following August.

The walls are impressively thick no less than 2m at the base and typically over 1m thick at the top. Interestingly, the walls on the northern side are thicker and there are no openings on this side above the basement probably as this was considered the main direction of any attack.

It wasn’t until 3 years later in 1859 that the tower was armed when several 68 pounders guns were taken out to the tower.

The guns had a maximum range of over 3000m and were capable of firing a variety of shells : solid shot; explosive shells; grapeshot; case shot and molten iron shells (thin walled shells filled with molten iron).

A minimum crew of 9 men (usually commanded by a non-commissioned officer) was required to fire each gun.

Brehon Tower never saw active any service during the 19th century. By the end of the century, as the threat to the Channel Islands declined, the tower became obsolete and fell into disuse.

In 1914 the British Crown relinquished ownership of Brehon tower and it came into the hands of the States of Guernsey.

Active Service in the 20th Century

As testament to the enduring strategic position of the tower it was once again fortified by the Germans in WWII.

The occupying forces decided to use the tower as an anti-aircraft position. Alterations had to be made to accommodate modern weaponry and the roof was reinforced with steel beams so that a 10.5cm coastal defence gun could be added to protect the approaches to St Peter Port harbour. Two 2cm Flak guns were also mounted on the roof.

The internal accommodation was also made more comfortable for the small garrison by sub-dividing the larger rooms, insulating it better and adding stoves and portable heaters.

Today there is no public access to the tower but it still serves as a useful sea-mark and frequently as a home to flocks of the Common Tern.