Home » General Interest » How Much is the Earth Affected by the Other Planets?

How Much is the Earth Affected by the Other Planets?

Published on May 29, 2020 in General Interest, Science 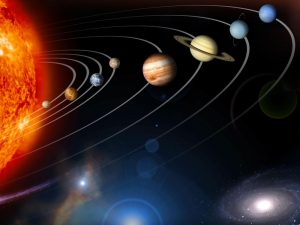 While the planets may not affect us in ways astrologers would have us believe, events on Earth are undoubtedly influenced by the gravitational pull of our celestial neighbours and the results are rather more important than liaisons with tall dark strangers.

Specific Effects on the Earth

Three of the above effects are especially important.


These variations in eccentricity, axial tilt, and precession of the Earth’s orbit are termed the Milankovitch cycle. Over thousands of years they collectively result in variations in the solar radiation reaching the Earth, and as we’ve already noted, they will have profound effects on the Earth’s climate.

Planet-induced Milankovitch cycles are now thought to play a role in the ebb and flow of the Ice Ages, and have recently been linked to the sudden change in the climate that led to the creation of the Sahara, around 5,500 years ago.

The (Current) Minimum & Maximum Distances Between Earth and the Other Planets