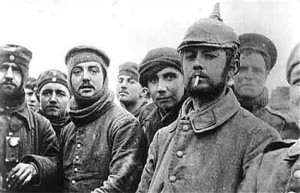 The First World War is a byword for mud, blood and slaughter on a huge mechanised scale. Men living in squalid trenches, sometimes only tens of yards apart from each other would daily tear each other to pieces if they got the chance. The dead were often left to rot unburied in no-man’s land.

There is, however, certainly in the early part of the war, a heart warming story that it didn’t necessarily have to be thus.

It was, famously, the Germans who started it. As night was falling on Christmas Eve, 1914, the sound of traditional carols wafted across no man’s land. Peeking nervously above the trenches, some British sentries reported seeing Christmas lanterns glimmering in the darkness. According to Rifleman C.H. Brazier of the Queen’s Westminsters:

The Germans entrenched opposite us began calling out to us ‘Cigarettes’, ‘Pudding’, ‘A Happy Christmas’ and ‘English – means good, so two of our fellows climbed over the parapet of the trench and went towards the German trenches. They had got barely halfway, however, when they ran into four Germans, who were armed only with cigars and a bottle of wine. They said “they would not shoot on Christmas Day, if we did not.” 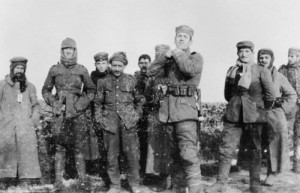 So then, it is no wonder that the Christmas truce is one of the best-known moments of the First World War. Amid the industrial slaughter, here was a reminder of simple human decency. One Private Scrutton wrote that in his stretch of the front, where the trenches were only 40 yards apart, the British had initiated the truce themselves. “Good morning, Fritz,” they shouted on Christmas Day.”How are you? Come over here.” “No. If I come I get shot.” “No you won’t … Come and get some fags, Fritz.”

Eventually they agreed to meet halfway. “One of our fellows thereupon stuffed his Packet with fags and got over the trench,” Scrutton wrote. “The German got over his trench, and right enough they met halfway and shook hands, Fritz taking the fags and giving cheese in exchange.”

The two things that most people remember about the truce are that the British and German soldiers sang Silent Night together, and that they put on a game of football, which the Germans won 3-2. In fact, neither story is entirely watertight. Silent Night was unfamiliar to many British soldiers, and their letters rarely mentioned it. One of the most common hymns seems to have been O Come All Ye Faithful, while many soldiers preferred popular songs like Auld Lang Syne.

As for the football, few accounts of the time mention it. Some soldiers wrote that they had played football, but players on both sides seem to have been British. A soldier from Rugby told his parents that the Germans “wanted to play at football but that fell through”.

To his amazement, the Germans were rolling a barrel of beer across the wasteland

The truce was not universal – in some parts of the front, fighting continued as usual – but it was very common. Private Cunningham of the Scottish Rifles recorded that his comrades and the Germans sang carols to each other all night; then, in the morning, he saw some Germans approaching across the wasteland. They were rolling a barrel of beer, which they had liberated from an occupied brewery and which they offered to their British adversaries.

In another part of the front. Rifleman Brazier and his friends scoured some abandoned houses for a collection of top hats, straw boaters and umbrellas. “We dressed ourselves up in these and went over to the Germans,” he wrote home. “It seemed so comical to see fellows walking about in top hats and with umbrellas up. Some rode the bicycles backwards. We had some fine sport and made the Germans laugh “ 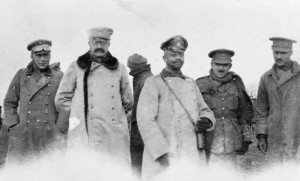 Of course not everybody approved of the Christmas truce. Many senior officers were appalled, and even some ordinary Soldiers refused to observe the Christmas festivities. One Leicestershire private sadly reported that although an informal truce had had been agreed, when the British emerged from the trenches the Germans opened the on them, “killing two and wounding many more”.

And although pacifists hoped the truce was a sign of things to come, and that soldiers would soon throw down then weapons and clasp hands for good, the killing routine soon reasserted itself.

On Boxing Day “the alarm went about midnight, and we stood up till daybreak, when we found that our pals of the previous two days had tried to rush our position, but they got cut up as usual.” wrote Lance-Corporal Henderson of the Royal Engineers. “The next morning the ground where we had been so chummy, and where Germans had wished us a merry Christmas, was now covered with their dead”


For a truly splendid selection of letters recording the Christmas truce, see christmastruce.co.uk.


How the Papers Reported the Event 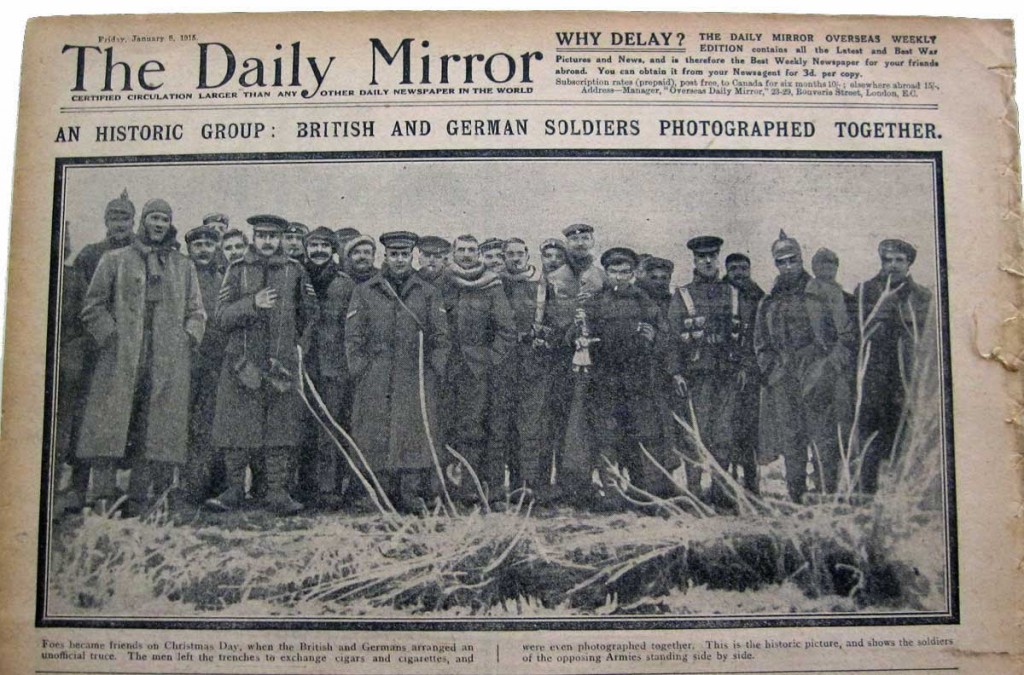 Foes became friends on Christmas Day, when British and Germans arranged an unofficial truce. The men left the trenches to exchange cigars and cigarettes and were even photographed together. This is the historic picture, and shows the soldiers of opposing Armies standing side by side. 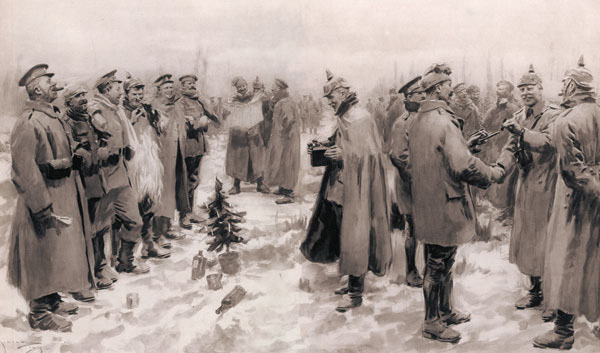 BRITISH AND GERMAN SOLDIERS ARM-IN-ARM AND EXCHANGING HEADGEAR: A CHRISTMAS TRUCE BETWEEN OPPOSING TRENCHES. DRAWN BY A. C. MICHAEL SAXONS AND ANGLO-SAXONS FRATERNISING ON THE FIELD OF BATTLE AT THE SEASON OF PEACE AND GOODWILL: OFFICERS AND MEN FROM THE GERMAN AND BRITISH TRENCHES MEET AND GREET ONE ANOTHER – A GERMAN OFFICER PHOTOGRAPHING A GROUP OF FOES AND FRIENDS.

The spirit of Christmas made itself felt in at least one section of the trenches at the front, where British and German soldiers fraternised, and for a brief while, during an informal and spontaneous truce, there was “peace on earth and goodwill towards men” among those who a few hours before had been seeking each other’s blood, and where bound to do so again after the truce was over. The part of the British lines where these incongruous scenes occurred, was, it is said, at a point where the enemy’s trenches, only about eighty yards away, were occupied by a Saxon regiment. Further along the line, where Prussian troops were said to be stationed, there was a certain amount of fighting. It was apparently towards the British left that the friendly truce was observed, while officers and men from both sides left their trenches and met in No Man’s Land between, where, as a rule, no man dares to show so much as the top of his head. British and Germans met and shook hands, exchanged cigars and cigarettes, newspapers and addresses, and wished each other the compliments of the season, conversing as far as possible with the aid, as interpreter, of a German soldier who had lived in America. A group of British and German soldiers, arm-in-arm, some of whom had exchanged head-gear, were photographed by a German officer. The figure on the extreme left in our drawing, for instance, is a German soldier in a British service-cap, while the fourth figure from the left is a British soldier in his goat-skin coat wearing a Pickelhaube, or German helmet. Some of the British, it is said visited the German trenches and an Anglo-German football match was even played. The dead who lay in front of the trenches were buried, and a party of German brought back they body of a British officer.