Home » General Interest » The Meaning of 12 Days of Christmas Carol

The Meaning of 12 Days of Christmas Carol 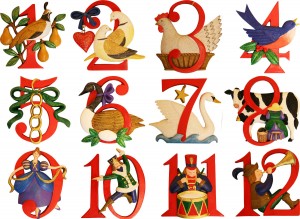 There is one particular Christmas Carol that continues to baffle people – “The Twelve days of Christmas”. What in the world do ‘leaping lords’, ‘French hens’,’swimming-swans’ and especially the partridge who won’t come out of the pear tree have to do with Christmas?

From 1558 until 1829, Roman Catholics in England were not permitted to practice their faith openly. Someone during that era wrote this carol as a catechism song for young Catholics. It has two levels of meaning: the surface secular present giving meaning plus a hidden meaning known only to members of their church. Each element in the carol has a code word for a religious reality which the children could remember.

For example, the “true love” in the carol doesn’t refer to a romantic couple, but is the Catholic Church’s code for God. Whilst the person receiving the gifts is someone who has accepted the code ie the “true love” = God.

If you add up all the gifts in the 12 Days of Christmas there’s 364 (admit it you’re reaching for pad & pen to check).