Home » General Interest » The Star of Bethlehem – The Evidence

The Star of Bethlehem – The Evidence 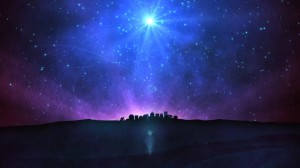 The nativity is not just a nice story. It may surprise you to know that in historical terms there’s more documented eveidence for the existence of Jesus than Julius Caesar, curious I know. So given that Jesus existed, he had to be born right ? There are many parts to the story of the nativity, Shepherds, Angels, Wise men and of course the star. Well that last bit must be made up surely?  Well … maybe not !

In 1954, Arthur C Clarke (the same of ‘2001 Space Odyssey’ fame) suggested that the event may have been due to a supernova; the detonation of a super-massive star. A report of just such an event turned up in 1977 in records of celestial events kept by Chinese astronomers, which suggest a bright star suddenly appeared near the constellation Capricorn in 5BC and lingered in the sky for 70 days before fading. This actually fits quite well with discoveries of errors in the original calculations of our AD/BC dating system which now places Jesus’ birth to be somewhere between 4-6 BC (Was Jesus really born on the 25th December?.)

However, and there’s always a ‘however’ isn’t there, the problem lies in that figure of 70 days. Astrophysical theory provides a link between how bright a supernova is and how long it takes to fade and for the “Christmas supernova” to have faded so quickly, the original explosion would have been a bit of a damp squib.

However (there it is again), what may be the best theory yet was put forward in 1999 by Mark Kidger, who argued for the Star being a nova rather than a supernova. A nova is a kind of stellar explosion triggered when hydrogen is dragged from one star on to another orbiting around it.

The most convincing explanation is the one that does the best job of explaining the Star’s sudden appearance, location and brightness and this last ‘nova theory’ fits in well with both the Gospel accounts and known physics. In addition it is also backed up by Chinese astronomical records, which seem to point to a nova explosion in the constellation Aquila in mid-March, 5 BC.


So there you have it not just a “nice story” after all.