The Works of Victor Hugo 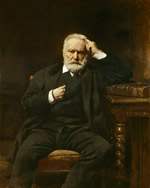 Victor Hugo is, without a doubt, the most famous literary figure ever to have lived in the Channel Islands.


He was born in Besançon in 1802. He very soon realised that he had a literary calling, and by the age of 13 he’d won several awards, including two “mentions” from the Academie Francais. He was a truly prolific writer with much of his work having a overt political and social sub-text or commentary. To understand the context surrounding his writings see the Historical Background panel at the end of this article.


Below is a list of his works. Hover your mouse over a link to show a pop-up summary.
Note : Victor Hugo also published many poems. Not all of which are listed here.

Victor Hugo lived in unstable times in France. There was much political unrest following the Napoleonic years of rule in France and much social deprevation. Victor Hugo gained more and more prominence as his works became popular and was always keen to voice his political and social opinions. He eventually went into self imposed exile over his views when Louis-Napoléon (nephew of Napolean Bonaparte) seized power.Below is a brief overview of the historical context which inspired much of his work.

Louis-Napoléon had previously made unsuccessful attempts to gain power, leading to his exile in London. His final attempt resulted in a coup d’état on 2 December 1852. French guards opened fire on a group of protesters, causing several deaths. This did little to help achieve the reputation that Louis-Napoléon had hoped for. In addition to this, he proceeded to change the constitutional laws governing the length of time that an emperor could rule.

Hugo’s sympathies lay with the working classes,and he was appalled by what he saw as a willingness to kill in order to gain power. Viewed as the voice of the masses in France, Hugo used his substantial influence to gather support against Louis-Napoléon. His contempt was best illustrated in a speech delivered to the Académie française, where he declared, ‘Quoi? Après Augustus, nous avons Augustule!’ This is a reference to the Roman emperor Augustus, and the suffix -ule derives from a Latin diminutive, indicating an object or person that is smaller in stature. This deliberately antagonistic declaration encapsulates Hugo’s view: Louis-Napoléon was far removed from the great military leader that his uncle, Napoleon Bonaparte, had been.

In addition, Louis-Napoléon’s legitimacy was also brought into question. Rumours abounded (although none was ever proven) that he was an illegitimate child — a product of one of his mother’s numerous affairs — and therefore could claim no right to his title. Hugo seizes on this in an attempt to discredit his position.

His vociferous condemnation of Louis-Napoléon as a traitor, usurper and dictator put Hugo and his family in danger . Realising this, Hugo fled his beloved France, vowing never to return until a new order was installed. After stopping in Brussels and then Jersey, Hugo settled with his family in Guernsey and remained there until 1870. Despite the distance from his readership, Hugo’s influence remained strong and the years in exile produced a flurry of literary activity.

Written in 1853, Les Châtiments is arguably Hugo’s most scathing work, including Les Égouts (‘The sewers’), which contrasts the lives of the poor whom Hugo claims Louis-Napoléon ignored with the pompous grandeur to which the emperor aspired. Even the editor of the collection claimed that Hugo had gone too far with his vehement criticisms of the Second Empire. However, even if Hugo’s comments did exaggerate the failings of Louis-Napoléon’s regime, they present a strong critique of a society bound by censorship of the press and the arts.