Home » Science » What is smashed in an Atom-Smasher (or particle accelerator) ?

What is smashed in an Atom-Smasher (or particle accelerator) ? 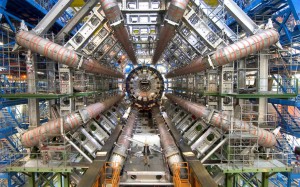 The popular image of an atom-smasher – or particle accelerator – is of a device that somehow smashes atoms together with such high energy that they break apart and we can see what’s inside them.

There are aspects of ‘atom-smashing’ experiments which can give that impression. Atoms and some of the particles that make them up, such as electrons and nuclei , are certainly sent hurtling towards each other at extremely high speeds; they certainly collide; and there certainly emerges from that collision a range of particles that were not there before and could be thought to come from ‘inside’ the atom.

You could think of it as two double-decker buses that hurtle towards each other at high speed and when they collide they break up into seats and engines and wheels and windows and passengers and drivers. But in fact, it’s not like that at all.

Physicists are building particle accelerators that cause collisions at higher and higher energies in order to create particles that never been seen before. The results of such collisions can be as surprising as if two double-decker buses collided and the result was a white Ford Mondeo, a black Harley Davidson motorbike, an electric cooker, three wooden dining tables, a hundred teacups, six Harrods hampers and a ton of chalk.


Mass or Enegry … it’s all the same

We jest of course. But what is happening, if the experiment goes well, is that the collisions occur at such speed that all of the mass of the particles is turned into energy. One of the most significant of Einstein’s insights was the fact that mass and energy are equivalent, and can be changed from one to the other. His equation e = mc2 is the exchange rate for that equivalence, just as you might say £ = $c2, with c being the number 1.25, so that c2 is 1.56, showing that you can exchange a pound for 1.56 dollars. If you change £100 into dollars, you can then change the $156 into any other combination of currencies you like and it is irrelevant that you started with pounds.

So the first result of the collision of particles is the disappearance of the particles altogether, just as your pounds disappeared. They are replaced by a burst of energy – a bunch of dollars. Then this result is followed immediately by that energy being converted into particles. Since the burst of energy has no ‘memory’ of the particles in the original collision, it is free to turn back into whatever particles it likes, consistent with the ‘exchange rate’ between energy and mass. If the experiment is done often enough, among those particles produced as a result of the high energy collisions will be new types of particles that don’t exist at all in our universe today. Using this knowledge, Physicists are employing particle accelerators to recreate the conditions that existed in the early moments of the universe when they believe a whole range of other particles created and destroyed in the high-energy environment.