5 Myths About World War I Debunked 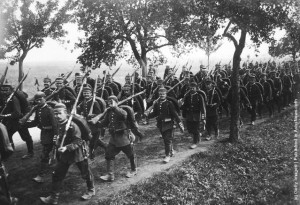 2014 is the 100th anniversary of the start of World War I, the supposed “war to end all wars”. It was the first ‘modern mechanised war’ and a lot of myths about it have been built up over the years often by revisionist historians using ‘hind-sight’. Some of these so called “facts” are blinding us to the realities of WW1. We are also in danger of belittling the experience of soldiers and civilians caught up in this conflict. In this article we look at some of the bigee “facts” that are just plain wrong …

In fact, as a British soldier you were more likely to die during the Crimean War (1853-56) than in World War I.

2. Men Lived in the Trenches for Years on end 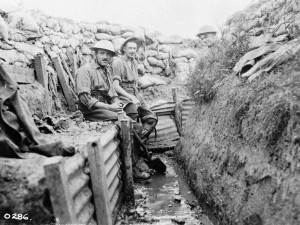 As well as being an extremely hostile environment to live in front-line trenches were often wet, cold and exposed to the enemy. Units would’ve therefore quickly lost their morale if they’d spent too much time in them.

As a result, the British army rotated men in and out continuously. Between battles, a unit spent perhaps 10 days a month in the trench system, and of those, rarely more than 3 days right up on the front line. It was not unusual to be out of the line for a month.

During moments of crisis, such as big offensives, the British could occasionally spend up to seven days on the front line but were far more often rotated out after just a day or two.

3. The Generals were incompetent

Not entirely true. Naturally, some generals were not up to the job, but others were brilliant, such as Arthur Currie, a middle-class Canadian failed insurance broker and property developer.

During the war more than 200 generals were killed, wounded or captured. Most visited the front lines every day. In battle they were considerably closer to the action than generals are today.

Rarely in history have commanders had to adapt to a more radically different technological environment.

British commanders had been trained to fight small colonial wars, now they were thrust into a massive industrial struggle unlike anything the British army had ever seen.

Despite this, within three years the British had effectively invented a method of warfare still recognisable today. By the summer of 1918 the British army was probably at its best ever and it inflicted crushing defeats on the Germans.

‘Lions led by donkeys’ is a phrase often trotted out to decsribe the Generals.

This saying was supposed to have come from senior German commanders describing brave British soldiers led by incompetent old toffs from their chateaux. In fact the incident was made up by historian Alan Clark.

4. Gallipoli was only fought by Australians & New Zealanders 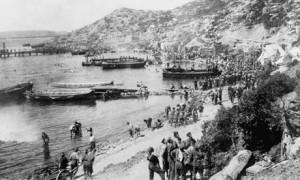 Not true. In fact far more British soldiers fought on the Gallipoli peninsula than Australians and New Zealanders put together.

Britain lost four or five times as many men in the brutal campaign as her imperial Anzac contingents. The French also lost more men than the Australians.

This misconception probbably comes about as the Aussies and Kiwis commemorate Gallipoli ardently, and understandably so, as their casualties do represent terrible losses both as a proportion of their forces committed and of their small populations.

5. Tactics on the Western Front remained unchanged despite repeated failure.

Again not true. Never have tactics and technology changed so radically in 4 years of fighting. It was a time of extraordinary innovation. In 1914 generals on horseback galloped across battlefields as men in cloth caps charged the enemy without the necessary covering fire. Both sides were overwhelmingly armed with rifles. Four years later, steel-helmeted combat teams dashed forward protected by a curtain of artillery shells.

Furthermore they were now armed with flame throwers, portable machine-guns and grenades fired from rifles. Above, planes, that in 1914 would have appeared unimaginably sophisticated, duelled in the skies, some carrying experimental wireless radio sets, reporting real-time reconnaissance.

Huge artillery pieces fired with pinpoint accuracy – using only aerial photos and maths they could score a hit on the first shot. Tanks had gone from the drawing board to the battlefield in just two years, also changing war forever.