Elizabeth I of England

“A Close Run Thing” – a paraphrase of Lord Wellington’s famous verdict on the Battle of Waterloo, some 227 years AFTER the Spanish Armada, is something that could equally be applied to the Armada’s attempted invasion of Britain.

We like to think of the Royal Navy, led by the likes of Drake & Raleigh, as plucky little fighters whittling down the Spanish leviathan as it chugged up the English Channel on its inexorable path of conquest. However the truth is a little different and if it weren’t for some key items of luck, 1066 wouldn’t be the date that British schoolchildren remember as the last time England was invaded but 1588 (and we’d all probably be speaking Spanish as well). 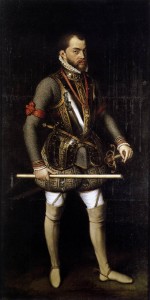 Philip II of Spain had been co-monarch of England until the death of his wife, Mary I (daughter of Henry VIII), in 1568. A devout Roman Catholic, he deemed his Protestant sister-in-law and successor, Elizabeth I, a heretic and illegitimate ruler of England. Indeed he had actively supported plots to have her overthrown in favour of her Catholic cousin, Mary, Queen of Scots. These plans being finally thwarted when Elizabeth had Mary imprisoned and finally executed in 1587. In addition, Elizabeth, who sought to advance the cause of Protestantism where possible, had supported the Dutch Revolt against Spain.

Thus it came about that, in retaliation, Philip planned an expedition to invade England and overthrow the Protestant regime of Elizabeth, thereby ending the English material support for the Netherlands’ fight for independence and cut off the ongoing English attacks on Spanish trade and settlements in the New World. Elizabeth was a keen supporter of “legal pirates”, or privateers, such as Francis Drake, amongst others. Philip’s expedition took on the tone of a Crusade and had the full backing of the Catholic Pope, Sixtus V.

In addition, in the Spanish Netherlands, 30,000 soldiers awaited the arrival of the armada, the plan being to use the cover of the warships to convey the army on barges to a place near London. All told, 55,000 men were to have been mustered, a huge army for that time. 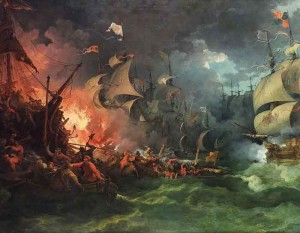 Fire Ships Amongst the Spanish Armada

The Armada was delayed by bad weather and was not sighted in England until 19 July, when it appeared off The Lizard in Cornwall. The news was conveyed to London by a system of beacons that had been constructed all the way along the south coast. On that evening the English fleet was trapped in Plymouth Harbour by the incoming tide. The Spanish meanwhile decided to sail on to the east towards the Isle of Wight. As the tide turned, 55 English ships set out to confront them from Plymouth under the command of Lord Howard of Effingham, with Sir Francis Drake as Vice Admiral.

The Armada continued up the English channel being harried all the way by the English ships. On 27 July the Armada anchored off Calais in a tightly-packed defensive crescent formation, not far from Dunkirk, where Parma’s army, reduced by disease to 16,000, was expected to be waiting, ready to join the fleet in barges sent from ports along the Flemish coast. However the army were not yet ready and the Spanish fleet was forced to wait.

the English fell upon the hapless Spanish…setting alight 8 fireships

It was at this point that the English fell upon the hapless Spanish. At midnight on 28 July, the English set alight 8 fireships, sacrificing regular warships by filling them with pitch, brimstone, some gunpowder and tar, and cast them downwind among the closely anchored vessels of the Armada. The Spanish panicked. Two fireships were intercepted and towed away, but the remainder bore down on the fleet. The fleet cut their anchor cables and scattered in confusion. No Spanish ships were burnt, but the crescent formation had been broken, and the fleet now found itself too far to leeward of Calais in the rising southwesterly wind to recover its position. The English closed in for battle.

With its superior maneuverability, the English fleet provoked Spanish fire while staying out of range. The English then closed, firing repeated and damaging broadsides into the enemy ships. This also enabled them to maintain a position to windward so that the heeling Armada hulls were exposed to damage below the water line. Many of the gunners were killed or wounded, and the task of manning the cannon often fell to the regular foot soldiers on board, who did not know how to operate the guns.

Despite all this ferocious activity only 5 Spanish ships were lost outright with others running aground. However many of the remaining Spanish ships were severely damaged. The Spanish plan to join with Parma’s army had been defeated and the English had gained some breathing space, but the Armada’s presence still posed a great threat to England.

Nature then intervened, the wind had backed southerly, enabling the Spanish fleet to move northward away from the French coast. Although their shot lockers were almost empty, the English pursued in an attempt to prevent the enemy from returning to escort Parma. The English chased the Spanish up as far Firth of Forth off Scotland where on 2 August Howard called a halt to the pursuit. By that point, the Spanish were suffering from thirst and exhaustion, and the only option left was to chart a course home to Spain, by a very hazardous route, around the North of Scotland and down the West coast of Ireland. It was to prove disastrous with much of the Armada being lost.

On the face of it then the “Plucky Royal Navy beats Spanish Leviathan” may look like a plausible summary of this pivotal historical event. Whilst the Navy did play a big part, and the courage of the “British Tar” is never in doubt, when you look at the statistics along with the preparedness, or otherwise, of the land based forces to meet the invasion, things appear differently.

THE ARMADA IN NUMBERS

6 :
Only six Spanish ships out of 129 were destroyed asa direct result of naval combat.


6 :
In March 1587, the counties along the English Channel had just six cannon each.


50 :
It’s estimated that a minimum of 50 Armada ships were lost through accident or during Atlantic storms.


4,000 :
As the Spanish anchored off Calais. 4,000 militia based in Dover deserted in large numbers, possibly because they were unpaid.

If the Duke of Parma’s 27,000-strong invasion force had safely crossed the narrow seas from Flanders, the survival of Elizabeth I’s government and Protestant England would have looked doubtful indeed.

If those battle-hardened Spanish troops had landed, as planned, near Margate on the Kent coast, it is likely that they would have been in the poorly defended streets of London within a week, and that the queen and her ministers would have been captured or killed. England would have reverted to the Catholic faith and there may have been no British empire.

It was bad luck, bad tactics and bad weather that defeated the Spanish Armada – not the derring-do displayed on the high seas by Elizabeth’s intrepid sea dogs. But it was a near-run thing. Because of Elizabeth’s parsimony, driven by an embarrassingly empty exchequer, the English ships were starved of gunpowder and ammunition and so failed to land a killer blow during nine days of skirmishing up the English Channel in July and August 1588.

Only six Spanish ships out of the 129 that sailed against England were destroyed as a direct result of naval combat. However, a minimum of 50 Armada ships (probably as many as 64) were lost through accident or during the Atlantic storms that scattered the fleet en route to England and as it limped, badly battered, back to northern Spain.

More than 13,500 sailors and soldiers did not come home – the vast majority victims not of English cannon fire, but of lack of food and water, virulent disease and incompetent organization.

On land, decades of neglect had rendered most of England’s land defences almost useless against an experienced and determined enemy. In March 1587, the counties along the English Channel had just six cannon each. A breach in the coastal fortifications at Bletchington Hill, Sussex, caused 43 years before in a French raid, was still unrepaired. England had no standing army of fully armed and trained soldiers, other than small garrisons in Berwick on the Scottish borders, and in Dover Castle on the Channel coast.


So, as you can see English pluck and tenacity did have a part in sinking some ships, damaging others and forcing the Spanish ships out to sea from Calais, however luck, Spanish incompetence and mother nature also played a big part in a momentous moment in British history.