Home » General Interest » What would have happened if the gunpowder plot had succeeded?

What would have happened if the gunpowder plot had succeeded?

Any answer to this question will be, of course , pure speculation. However, exploring the possible outcomes of a successful Gunpowder plot is useful in highlighting the underlying tensions at play in what was a very charged historical context.

The 1605 gunpowder plot to assassinate King James I and destroy the English parliament was a relatively small conspiracy – the action of a handful of desperate Catholics with next to no chance of success.

Catholics were under constant surveillance from the security services, their houses raided and their priests imprisoned and executed. The ringleader, Robert Catesby, was already a marked man for his involvement in the Essex rebellion in 1601 against Elizabeth I] A lot depended on Guy Fawkes, who was outside the inner core of the plotters and was a convert rather than a cradle Catholic.

The gunpowder plot came frighteningly close to dismembering the entire structure of monarchy, church and state in one spectacular strike.

Government propagandists worked hard to conceal this fact, but it could all have been so different, and James’s government knew it.

The significance of the barrels stacked in the cellar under the House of Lords was missed in the first security sweep of the palace. It wasn’t until a second search that 18 hundredweight of gunpowder was discovered under a pile of firewood.

Guy Fawkes was arrested carrying three fuses to prime the powder. A shaded lantern with a candle stood ready to supply the flame.

Fawkes received the death penalty for High Treason, and was dragged to the gallows in Old Palace Yard to be hanged, drawn and quartered. Before the executioner could begin the gruesome act, Fawkes leapt from the gallows, breaking his neck and sparing himself the excruciating fate the law had set out for him.

Other conspirators also escaped the chop. Ringleader Robert Catesby and several others were killed in a gunfight with authorities in Staffordshire, while another plotter died from illness at the Tower of London before he could stand trial.

If the plot had run as intended, the destruction of life and property would have been devastating.

Estimates of a detonation on this scale suggest that the House of Lords, the nearby House of Commons and Westminster Hall would all have been destroyed.

MPs would have clustered at the back or in the corridor leading into the Lords, listening to the king’s speech and waiting to elect their speaker. The entire establishment of church and state – royal family, nobility, senior churchmen, knights, principal officers of the crown and prominent courtiers – would have been there in one tightly packed space. For anyone intent on destroying the Protestant state, it was an opportunity like no other.

Another casualty of the explosion would almost certainly have been Westminster Abbey, facing the House of Lords across Old Palace Yard.

Without a monarch or a parliament that could act in the king’s name, there would have been no one to give orders and no means of authorising legitimate government

With the king, queen, Prince of Wales and his key ministers all dead or dying, English government would have ceased to exist. The small garrison in the Tower, and the lord lieutenants who acted as military commanders in the counties, would have lost their entire chain of command. Without a monarch or a parliament that could act in the king’s name, there would have been no one to give orders and no means of authorising legitimate government. 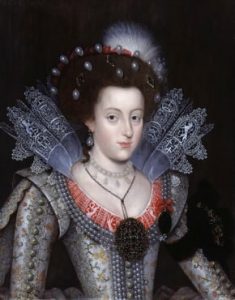 Elizabeth Stuart, daughter of King James I. 9yr old Elizabeth was a key target of the plotters

In this state of national paralysis, the plotters would have had to act fast. Catesby had prepared a rendezvous with local Catholic gentry close to his family home in Northamptonshire, under cover of a day’s hunting.

The “hunting” party’s target was King James’s daughter Elizabeth, 9 years old and under the guardianship of the Protestant Lord Harington at Coombe Abbey. Harington moved the princess to nearby Coventry when he heard about the plot, but his small retinue would have been quickly overwhelmed by Catesby’s armed band.

Two totally different scenarios could then have played out depending on what had happened to the 4 year old Prince Charles – Duke of York. Charles was the next heir to Prince Henry and the gunpowder plotters were unsure how to factor Charles into their plans – because they couldn’t be certain whether he would have been present at the opening of parliament.

What next? : A religious civil war, like those which had crippled France during the later 16th century? The break-up of the union of the crowns of England and Scotland, barely 2 years old and wholly dependent on the person of James I? A resurgence of Catholic forces in Ireland and the overwhelming of the Protestant plantations?

All of this is speculation; but sometimes taking a counterfactual perspective can reveal the deep forces underlying the accidents of history.