Argentinosaurus – Largest of the Large

One might have thought that asking “What was the largest Dinosaur ?” would be a simple enough question. However it turns out to be a lot harder than you might think. You see palaeontologists sometimes have to work with very small samples of fossilized remains of these ancient leviathans. Sometimes just a tooth, or leg bone may be discovered and have to be used to decide if they’ve discovered a new species and if so what other characteristics can be deduced, among which would be size.

So when we state that Argentinosaurus was (probably) the “largest of the large” we have to qualify it by saying , “based on evidence to date”. We will also have to look at some other current contenders for this title.

Although paleontologists claim to have found bigger dinosaurs, Argentinosaurus is the biggest sauropod whose size has been backed up by convincing evidence. This gigantic plant-muncher (named after Argentina, where its remains were found) measured about 120 feet from head to tail and may have weighed over 100 tons. Just one vertebra of Argentinosaurus is over four feet thick! (Other, less-well-attested contenders for the “biggest sauropod” title include Futalognkosaurus, Bruhathkayosaurus and Amphicoelias.)

Based on the estimated mass Bruhathkayosaurus may have weighed 175-220 tons. However there is difficulty in establishing the identity of the animal from what remains have been found and there is no certainty that it is even animalian. 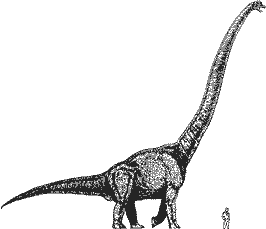 Named after Poseidon, the Greek god of the ocean, Sauroposeidon was once thought to be the biggest dinosaur of all time, but paleontologists have since concluded that it was slightly lighter than Argentinosaurus, “only” about 50 or 60 tons. However, Sauroposeidon was almost certainly the tallest sauropod ever to roam the earth; its neck alone was almost 40 feet long!