Home » History » Did the British’s experiences in the Boer War help or hinder fighting strategies at the start of the First World War?

Did the British’s experiences in the Boer War help or hinder fighting strategies at the start of the First World War? 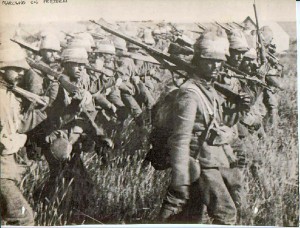 An interesting question … The First World War is often seen, wrongly, as a byword for incompetence. Generals with a 19th Century mentality fighting a 20th Century ‘modern’ war, incapable of coming up with innovative plans to break the deadlock. So this question is really asking “Would it have been worse or was it indeed better than it could have been because of Britain’s experiences in the Boer War some 12 to 15 years earlier ?”


The Boer War – A Lesson Learned the Hard Way

The Boer War (1899-1902) was a watershed conflict for Britain. Although the war ultimately ended in a British victory, it was prolonged, bitter and bloody. In 1901, Rudyard Kipling reflected on the struggle in his poem The Lesson, which noted:

This was especially true of the British Army, which was determined to learn from the painful experience gleaned in South Africa. As a result, tactics, training and equipment were dramatically improved between 1902 and 1914.

On the eve of the First World War, the British Army had the highest standard of individual training in Europe.

On the eve of the First World War, the British Army had the highest standard of individual training in Europe. Furthermore, the combat experience gained in the Boer War was valuable for British commanders. All of the senior commanders of the 1914 British Expeditionary Force, and 138 out of 157 infantry battalion commanders, had seen action. Colonial warfare had taught British officers much about leadership, morale, logistics and initiative. Though the pace and intensity of the Great War was very different from combat in Africa, the lessons learned on imperial service had universal value.

Unfortunately, the ferocity of the first five months of the First World War took a dreadful toll on these highly trained men and experienced officers. By the end of 1914, the army had suffered 89,000 casualties from its pre-war strength of 250,000 and 58 per cent of the original cadre of battalion commanders had fallen. The loss of these veterans meant that from 1915 onwards the army was forced to endure a costly learning curve as new, inexperienced officers and hastily trained volunteers were thrown into the maelstrom of trench warfare.


The Boer Wars – A Quick Backgrounder

There were in fact two “Boer Wars” :

Between 1835 and 1845, about 15,000 Voortrekkers (people of Dutch extract) moved out of the (British) Cape Colony across the Gariep (Orange) River into the interior of South Africa. Their ‘Great Trek’ was a rejection of the British philanthropic policy with its equalisation of black and white at the Cape, and of the political marginalisation they experienced on the eastern Cape frontier.

They established two independent republics – the Transvaal and the Orange Free State – both legitamised and recognised by Britain in the 1850s.

The republicans acquired the name ‘Boers’, the Dutch and Afrikaans word for farmers. Like the African societies within their borders, the stock farming Boers enjoyed a pre-capitalist, near-subsistence economy. Only gradually effective state administrations emerged. 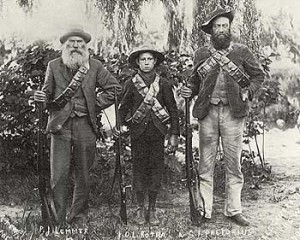 In 1875 the British Colonial Secretary, Lord Carnarvon, proposed a confederation of South African states along the lines of the Canadian federation of 1867.

It was hoped that in the rather unstable political and economic fragmented region this would create a settled environment for greater economic integration and progress under British supremacy, particularly after the discovery of diamonds in 1867 near the confluence of the Orange and Vaal Rivers.

Initially, the Transvaal Boers adopted a policy of passive resistance. When the British government made its determination to uphold the annexation clear, the Boers turned to armed resistance in December 1880.

This then set the continent on course for the two Boer Wars that were to follow.