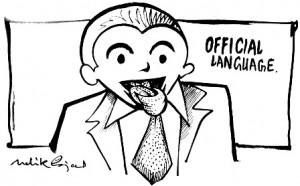 It’s part of the human experience that despite our best efforts “Things just don’t work”. Here we look at some amusing examples of how to fail with real elan…

Mr William Smith of Norfolk sailed from Scotland to Great Yarmouth in August 1978 . Showing great independence of mind, en route, he missed Bridlington Harbour by 400 yards and rammed a jetty; at Yarmouth he overshot by 90 miles and ran aground off Kent.

A full-scale search for the boat was hampered by the change in its appearance. When it left Scotland, it was black with one mast. When rescued, it had two masts and was painted green. ‘I passed the time while I was aground redecorating’, Mr Smith explained.

Entering Yarmouth Harbour, he scraped a floating museum, collided with a small coaster and hit an entrant for the Tall Ships yacht race. He also knocked several guard rails of a trimaran and got the ropes of the cargo vessel Grippen wrapped round his mast.

Describing the voyage as ‘Pleasant with no hassle or worries’, Mr Smith said he planned sailing to Australia next.

THE LEAST SUCCESSFUL ATTEMPT TO MEET A RELATIVE AT AN AIRPORT

In 1975 Mrs Josephine Williams and her family went to meet a long-lost brother at Heathrow Airport. They took home a complete stranger.

Greatly relaxed by in-flight drinking facilities, the traveller wandered into the airport lounge to be smothered by the kisses of Mrs Williams and her sisters. ‘Gee, this is great,’ he kept saying, all the while cuddling Mrs Williams in a manner which she later described as ‘not like a brother’.

His enthusiasm for British hospitality was modified, however, when Mr Williams shook his hand firmly and ushered him to a parked car. They first suspected that something was amiss when their relative tried to jump out of the car while travelling at speed up the motorway.

When told that he was being taken to a family reunion in Coventry, he replied, ‘Take my money. Here’s my wallet. Take it and let me go.’ Slumped miserably in the front seat, he added, ‘This is the first time I have been to England and I am being kidnapped.’

‘I thought from the beginning he wasn’t my brother, Mrs Williams said later, ‘but my sisters wouldn’t listen. They said I was only twelve when he left for America and wouldn’t remember.’

Mr Ronald Davies took over two years to make the voyage from Belfast to Plymouth. A duller man would have done it in a few days. He left Ireland in 1974 because the UDA Protestants suspected him of working for the IRA while the IRA suspected him of working for British Intelligence. The situation was clearly impossible and so he set sail with his girlfriend, Brenda CoUopy, aiming for the Isle of Man, in their 17-foot sloop, Calcutta Princess. In the months which foUowed they attracted six coastguard alerts, four lifeboat rescues and the assistance of a Royal Navy Helicopter and the aircraft carrier Hermes.

On the first leg of their journey, to the Isle of Man, Mr Davies and Miss Collopy got lost and had to be guided into Douglas by a lifeboat. From there they went to Holyhead and set sail for Fishguard. When they failed to arrive the coastguards mounted a search. The mariners eventually appeared in Waterford across the Irish Sea. They set course again for Fishguard but turned up back in Holyhead. On the third attempt they made it to Fishguard.

Later, off the Devon coast, they had to be guided by radio into Clovelly. In Cornish waters their first port of call was Padstow from where they set sail for Newquay. However they were unable to find their way into the harbour and returned to Padstow where they got caught in a storm and had to be rescued by the Padstow lifeboat. At this point Miss CoUopy left the boat and Mr Davies carried on alone. After a second rescue by the lifeboat from Padstow five weeks later, he made it as far as the waters off St. Ives where yet again he had to be towed in by lifeboat. He completed the journey overland in August 1977.

On 26 May 1979 the British Communist Party organized a daytrip to Calais for a protest march against the Common Market. There was to have been a mass march through the streets, led by a jazz band, and a reception with M. Jean-Jacques Bardies, the Communist Mayor.

When the 250 British day trippers arrived at Calais harbour, they heard that the march had been called off because of the rain. They were also told that the jazz band would not be arriving. ‘They were too expensive’, a tour operator said at the docks, ‘and they wanted to bring a piano.’

In any case, it was discovered that the British had left their banner in the coach at Dover and the French would not know what they were demonstrating about. In spite of this, the visitors decided to hold a short march from the lunch room to the meeting hall. However, the lunch venue was changed at the last minute and the hall turned out to be across the road. ‘It’s not really far enough to march’, commented the tour director, Mr Landen Temple.

After the speeches, Mr Temple announced that the mayoral reception was off. Apparently the room had been double booked with a convention of football referees who took precedence. Furthermore, an international meeting of trade unionists planned for four o’clock had been mistakenly held while the British delegation was having lunch. Also, the social evening with the Calais Young Communists was cancelled because they turned out to be a serious bunch who wanted to have a meeting instead. ‘It’s been a bit of a mess all round’ said Mr Temple with an engaging smile.

After the birth of their second child, Mr and Mrs Len Trott decided that their family was large enough. So in March 1978 she went into hospital for a hysterectomy. Eighteen months later she gave birth to a 6lb 5 1/2 oz son called Martin.