There are some events in history upon which turn the fate of nations. A point at which history can go either way. In this article we look, very briefly, at four of, what we think of at least, are key battles in the life and evolution of Great Britain. Battles which have played a part in defining what Britain is, from the Norman invasion of 1066 to the vast set-pieces of the Second World War. Who can fail to be stirred by the story of Henry V’s victory at Agincourt or made proud by the memory of the fighter pilots of the Battle of Britain, the ‘few’ made legend by Winston Churchill’s famous speech?

Mons marked the first battle between the British & German Armies in the First World War.

At that time Britain was primarily a sea power and only maintained a very small professional Army. Britain declared war against Germany after Germany violated Belgian neutrality in 1914 when they invaded Belgium, a country Britain was obliged to protect by treaty. A small British expeditionary force (BEF) initially numbering only about 80,000 soldiers was sent to northern France, arriving on August 14, whilst the German Army in total numbered over a million men.

THE FIRST V.C.s OF THE WAR

During the battle of Mons the first Victoria Crosses (VC) of the war were awarded to Private Sidney Godley and Lieutenant Maurice Dease. The VC is the highest and most prestigious award for gallantry in the face of the enemy that can be awarded to British and Commonwealth forces.

Godley’s unit was ordered to defended the bridge across the Mons-Condé Canal whilst the BEF began their retreat. Lieutenant Dease and Godley volunteerd to man two machine guns to do this. After Lieutenant Dease was killed and despite being wounded Godley defended the bridge for a further two hours until he ran out of ammunition. His final act was to dismantle the gun and throw the pieces into the canal. He attempted to crawl to safety, but advancing German soldiers caught him and took him to a prisoner of war camp. Two men had literally held up the advance of a whole German Army.

The BEF, under its Commander-in-Chief, Sir John French planned to meet up with the French Fifth Army near Charleroi. However before reaching Charleroi, the BEF encountered cavalry patrols from the German First Army at Soignies on 22 August. The BEF changed tack overnight, and French ordered his five divisions to establish defensive positions at the nearby Mons Canal, unaware of the full strength and recent victories of the Germany Army facing him. 68,000 Tommies were about about to face a tidal wave of nearly 160,000 German troops along with 300 Royal Artillery guns against 600 German. The skill, courage and training of the BEF was to provide vital if this tiny force wasn’t to be overwhelmed.

The initial German action led by the German commander,von Kluck, against the BEF, began on 23rd August 1914 and went disastrously for the Germans, the British riflemen exacting heavy losses from the advancing German infantry. The efficiency of the British riflemen was such that von Kluck assumed that the enemy were using machine-guns.

Von Kluck then paused the attack in order to draft in reserves. The French Armies to the BEF’s right began a retreat so the British then began a strategic retreat to a second line of defence.

Von Kluck did not at first give chase, choosing instead to address the heavy casualties inflicted earlier in the day. Ultimately however he inflicted almost 8,000 casualties upon the British rear-guard at the Battle of Le Cateau on 26 August.

The BEF then began an exhausting retreat back to the River Marne some 250 miles away where the allies would turn and face down the German juggernaut, save Paris and push the German invaders back.

During the retreat the tiny BEF remained in contact with both the French Armies and enemy forces. Discipline and courage saved the BEF from total annihilation. Like Dunkirk 26 years later this was not a victory but a deliverance brought about by the pluck and courage of the British Tommy. 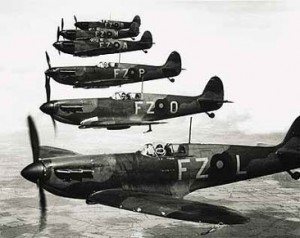 The glorious summer of 1940 saw Britain face its darkest hour since the Norman invasion 874 years earlier. Hitler’s Third Reich was approaching the apex of its military power, with much of Scandinavia, Eastern Europe and France under the Nazi yoke.

‘Operation Sealion’ – the German invasion of the British Isles – was ready for launch and all that stood in the way of a successful amphibious assault on the English coast was the RAF. Hermann Goering’s Luftwaffe was thus tasked with destroying Britain’s airborne defences.

The battle was fought in the skies above south-eastern England, with the RAF’s Hawker Hurricanes and Supermarine Spitfires engaging in short but intense dogfights with the Messerschmitt BF 109s protecting the German bombers heading towards British airfields. Young pilots – often with little training behind them – were ‘scrambled’ to their planes as orders came through from Fighter Command, using the new technology of radar to track the enemy aircraft approaching the coast.

The British pilots – alongside Czechs and Poles, exiles from a homeland now suffering Nazi occupation – and ground staff fought bravely, and Goering’s optimism in the superiority of his air force was shown to be severely misplaced. On 7 September, the Luftwaffe changed tactics and began their bombing of cities – the invasion was off. This date marks the end of the Battle of Britain and a crucial victory that repelled the Nazis and boosted British morale – but it also marked the start of the Blitz, the aerial bombing campaign suffered by civilians in London and other major population centres across the country.

By July 1942 the German Afrika Korps – led by the legendary German tank command, Erwin Rommel – had advanced significantly across northern Africa and were deep inside Egypt in a quest to secure access to the Suez canal and thus Middle Eastern oil for the fuel-hungry Nazi war machine.

General, Montgomery’s Desert Rats – the British 8th Army – were determined to stop him and the two forces met at El Alamein, a small town on Egypt’s Mediterranean coast about 150 miles (240km) north-west of Cairo.

In the evening of 24 October the Allied assault began, with sustained shelling of the German positions lasting more than five hours – 882 guns fired 600 rounds each at the enemy. Meanwhile the infantry made their advance with sappers – combat engineers – clearing minefields for the tanks to follow. 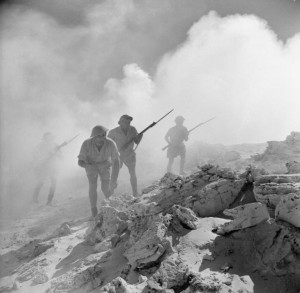 The fighting continued – with Allied advances met by German counter-attacks – until 7.00am on 4 November, when Rommel’s remaining divisions fled. Thanks to numerical superiority and equipment – particularly the arrival in the desert of the Spitfire – and Montgomery’s inspired leadership, the Allied forces had achieved a victory against the Nazis, their first in the war. “This is not the end. It is not even the beginning of the end”, Churchill solemnly proclaimed after the battle. “But it is, perhaps, the end of the beginning.”

The numbers involved in the Allied invasion of continental Europe on 6 June 1944 are still staggering. Over the night preceding the main landings on the beaches of Normandy, 24,000 Allied airborne troops were parachuted into France. At 6.30 in the morning, more than 160,000 troops stormed ashore from 5,000 ships on five beaches designated with the famous code words Sword, Juno, Gold, Omaha and Utah. It remains the largest amphibious invasion ever.

The landings had been preceded by years of careful planning, and the overall responsibility for their success rested with the American General Dwight D. Eisenhower. D-Day was notable for the deception operations that had become a British speciality in the latter part of the Second World War. Huge resources were poured into creating fake divisions based opposite Calais – they even enjoyed a visit from the king – to convince the Nazis that the attack would come there rather than in Normandy. The elaborate deception plan was supplemented by disinformation fed via the impressive network of double agents controlled by British Intelligence. These and other deceptions largely worked, and apart from the massive casualties suffered by the American units that landed on Omaha Beach, D-Day was a success, beginning the march to Berlin and victory in Europe that came ten months later in May 1945.