Home » History » How Did So Many Soldiers Survive the Trenches ?

How Did So Many Soldiers Survive the Trenches ?

One of the most common myths about World War I was that ‘Most Soldiers Died’. The horrific stories and images from the frontline all reinforce the idea that fighting in the trenches was one long bloodbath. Whilst the headline figures of dead and wounded in any set piece battle, such as The Somme in 1916, were appalling the fact is that as a British soldier you were more likely to die during the Crimean War (1853-56) than in World War I. In Britain around 6 million men were mobilised, and of those just over 700,000 were killed. That’s around 11.5%. Or to put it another way 88.5% survived, that is nearly 9 out of 10 British ‘Tommies’ survived the trenches.

So given this and what we know about trench warfare where your enemy could be a matter of yards away from you in an opposing trench, we have to ask “How Did So Many Soldiers Survive the Trenches ?”

The answer lies in the fact that the British Tommy only spent a small part of his time actually on the front line. In addition whilst there were trench raids and sniper attacks to contend with, major battles, where he had to ‘go over the top’, were confined to specific set engagements and were few and far between.


A Typical Day on the Frontline 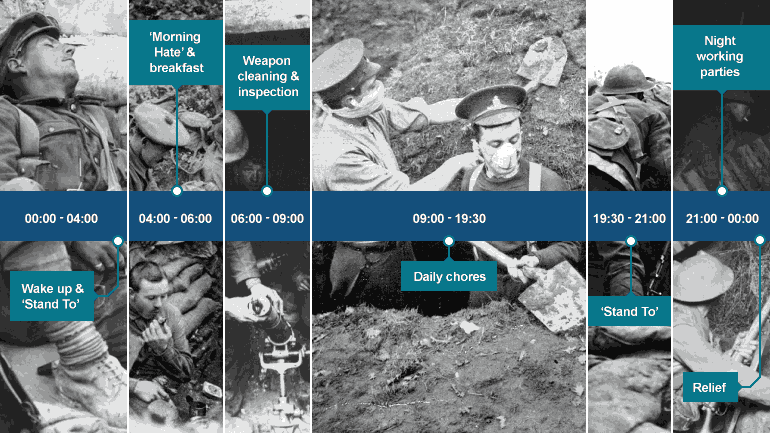 The average day began with ‘stand to’ before dawn. Gathering their weapons, soldiers took a place on the ‘fire step’, and as the sun rose, fired towards enemy lines in a daily ritual called the ‘morning hate’. After breakfast, the men worked on chores, from sentry duty to trench maintenance, spending their spare time catching up on sleep or writing letters. The ‘stand to’ was repeated at nightfall before groups were sent into the treacherous and deadly No Man’s Land. Others fetched rations, went on sentry duty, or left the firing line altogether. In all, most battalions rarely spent more than five days a month in the line of fire. So where were they most of the time?


How Often were Soldiers in the Firing Line? 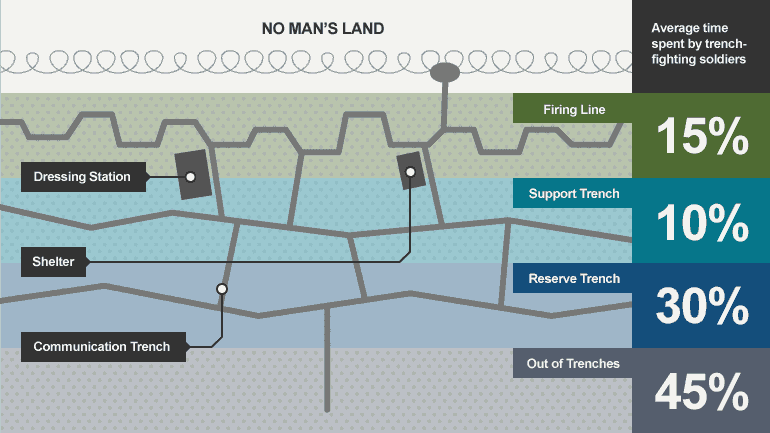 To keep pace with the demands of the war and help sustain morale, the British Army often rotated its soldiers around the trenches. One soldier, Charles Carrington of the Royal Warwickshire Regiment’s 1/5th Territorial Battalion, worked out that his section of the Front could be held by just 10% of his platoon’s troops. So the bulk of soldier’s time was divided between a range of specialist areas behind the front line, all of which was made safer by the ingenious design of the trench system itself.