Much has been written about the occupation and liberation of Guernsey from the Germans in World War II. But what about Guernsey’s nearest neighbour Herm? What was her war like? 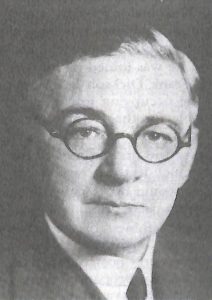 In 1920 Sir Percival Perry, later Lord Perry of Stock Harvard arrived in Herm waters aboard a friend’s boat and immediately fell in love with the romantic notion of owning his own island. Three years later he realised his dream, buying the lease from Compton Mackenzie.

He managed Herm well, investing much in developing it to what we see today. However by the 1930s he rarely spent more than 2 months a year on Herm because of his heavy workload. Consequently he wasn’t there when in 1940 Herm was threatened by Hitler’s victorious rampage through France.

Herm was claimed by the Third Reich when 3 uniformed Nazis arrived at Rosière Steps on the 20th July 1940.

They were met by the entire population – just one man living alone on the island. That man was Frank Dickson who’d been asked to look after Herm for a few days by Perry’s last remaining employee on the island, Mr. Kemp, the caretaker. Kemp meanwhile had made his way back to England – never to be heard of again.

The occupying force that day consisted of the Oxford educated and meticulously polite Major Maass plus 2 NCOs. They set off back to Guernsey that evening, leaving Frank Dickson alone once more.

Frank was soon joined by his wife Lilly and during the first months of the occupation the Dicksons were left very much to their own devices.

Over the next few months there were visits by German officers and their girlfriends, plus assorted shooting parties hoping to bag pheasants or rabbits.

However the peacefulness of the island was to be shattered in September 1940 when a propaganda unit arrived to film a seaborne mock ‘invasion’ of Herm. The film was entitled “The Invasion of the Isle of Wight” and shown for propaganda purposes back in Germany. The exercise being filmed by the propaganda unit had a more deadly intent though and Herm’s sandy beaches were really being used for practising landings from barges, in preparation for the invasion of England – Operation “Sea Lion”.

[film : the invasion of the isle of wight]

In March 1941 the Dicksons were joined for a month by their 17 year old nephew Martin Le Page. Life for them on the island at this time was very much a rural existence, trapping rabbits, milking the cow, tending the vegetable patch, collecting limpets for the chickens to eat, and gathering gulls’ eggs.

In 1942 Frank and Lilly Dickson were joined by Martin Le Page’s parents, Ernest and Daisy Le Page, who were appointed to look after a flock of 60 sheep.

However, almost as soon as they had settled in, the Dicksons were ordered to leave for Guernsey – Frank Dickson had made himself deeply unpopular with the German soldiers and the occupying commandant.

The Le Pages were left alone on Herm being joined later by Rose Clifford, a house keeper from Guernsey.

“Herm offered the chance of escape from the pressures of living with the Germans in Guernsey. There was complete freedom from all the military restrictions”

The Germans meanwhile continued to occasionally visit the island to either search the island buildings or use The Common for target practise.

1942 : The Germans Score an “Own Goal” & Shoot Down their own Aircraft

This state of affairs continued on until later in 1942 when an anti-aircraft battery of German soldiers moved into Herm. However their occupation was only to last a matter of weeks due to a stupendous German blunder. It was these soldiers who were probably responsible for shooting down one of their own planes which crashed near Belvoir.

Days later these same soldiers were recalled to Guernsey to who knows what fate! They left behind barbed wire around the south coast along with mines. 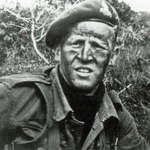 In February 1943 a party of 7 British Commandos and Royal Marines under the command of Captain Patrick Porteous, VC raided Herm.

They paddled ashore in a 14ft dory. Their objectives were to discover whether Shell Beach was mined, to locate the watch tower and to capture a guard (there wasn’t one!) and to confuse the Germans by distributing aircraft leaflets.

The party also checked out the Manor House. Finding the cottages and house empty they stole away again back into the night.

After D-Day the Le Pages were joined by the Macdonalds who were the caretakers on Jethou.

In a last twist to Herm’s War, 11 days before the final liberation of the islands the families on Herm were joined by a rather forlorn looking German officer who had apparently been exiled to Herm from Guernsey. He moved into The Manor but was rarely seen out and about on the island. It eventually turned out that his ‘crime’ was simply to be opposed to Hitler’s fortress policy. 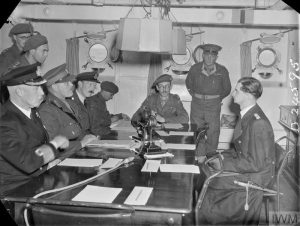 On May 9 1945 the liberating forces arrived in the Little Russell and the surrender of Guernsey was signed on HMS Bulldog.

On Herm, Mrs. Le Page found a small Union Jack and made her way to the harbour. There a young German soldier approached, saluted, took the flag and climbed to the top of the railway crane where he attached the flag. Not a word was spoken – none were necessary. It was the end of the occupation of Herm.

Five years of war had taken its toll. The island was in a run down state.

In 1949, the States of Guernsey bought Herm from the Crown so that the “unspoilt island idyll that could be enjoyed by locals and tourists alike”.

As thus it was that one of the island’s most influential tenants, Major Peter Wood, was awarded the post war tenancy.

When he took over the island the Manor was hidden in undergrowth and the windows and roofs of the houses had been blown off by a sea mine drifting into the harbour shortly after their arrival. However they set about restoring Herm’s prospects with gusto. They created a school, restored St Tugual’s Chapel along with the Manor, dairy and countless other projects.