Home » Food & Drink » How To … Make a Christmas Pudding

How To … Make a Christmas Pudding

The Christmas Pudding, that most lovely, in my opinion, of all the scrummy Yuletide fayre. In this article we look at that one of the most famous exponents of this dish, the Victorian cook Mr’s Beeton. 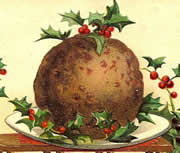 Christmas pudding, or plum pudding or figgy pudding, is believed to originate from the medieval period (early 15th centuary probably) when plum pottage was served during festivities. Plum pottage was a meat broth that was made made from chopped beef or mutton, onions and perhaps other root vegetables, along with breadcrumbs and dried fruit added for thickening purposes. It was seasoned with wine and spices. This form of broth developed into a thicker pudding during the seventeenth century when pudding cloths were invented; the meat content was later removed and it became more as we know it today. The pudding became specifically associated with Christmas, rather than merely any festive occasions, when it was introduced to the Royal Christmas dinner table by Prince Albert.

Plum puddings are traditionally flamed when served. To do this, warm 30-45 ml/2-3 tbsp brandy either in a metal soup ladle over a low flame or in a measuring jug in the microwave for 15 seconds on High. Ignite the brandy (if warmed in a ladle it may well ignite spontaneously) and carefully pour it over the hot pudding. Do not use holly to decorate the top of a pudding that is to be flamed.