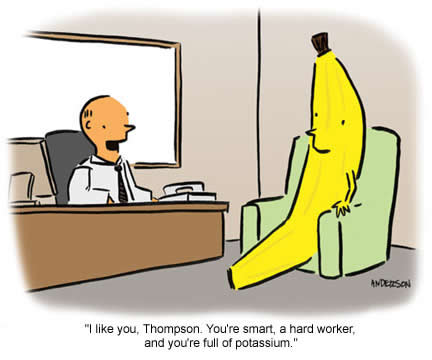 Next time you find yourself pondering on how to fill in those job performance reviews for your staff or team then you might like to consider some of these more witty, pithy and just down right funny comments … all genuinely used at sometime to appraise some of their more ‘less than capable’ colleagues.


‘Since my last report, this employee has reached rock bottom – and has started to dig.’

‘I would not allow this employee to breed’

This employee is really not so much of a “has-been”f but more of a definite “won’t be”.’

‘Works well when under constant supervision and cornered like a rat in a trap.’

‘When she opens her mouth, it seems that it is only to change feet’

‘This young lady has delusions of adequacy.’

‘He sets low personal standards and then consistently fails to achieve them.’

‘This employee is depriving a village somewhere of an idiot’

This employee should go far… and the sooner he starts, the better.’

‘A gross ignoramus – 144 times worse than an ordinary ignoramus’

I would like to go hunting with him sometime

‘He would argue with a signpost’

‘He has a knack for making strangers immediately.’

‘He brings a lot of joy whenever he leaves the room’

‘A photographic memory but with the lens cover glued on.’

‘Donated his brain to science before he was done using it’

‘Gates are down, the lights are flashing, but the train isn’t coming.’

‘Has two brains: one is lost and the other is out looking for it’

‘If he were any more stupid, he’d have to be watered twice a week.’

‘If you give him a penny for his thoughts, you’d get change’

‘The wheel is turning, but the hamster is dead.’