Home » Alderney » Local Historic Figures and Celebrities – Can you name them ?

Local Historic Figures and Celebrities – Can you name them ?

Guernsey Hotel Moores has a rather curious mural on the wall of it’s upper level – a pantheaon of Baliwick historical figures and modern day celebreties (including a rather curious cat) … but can you name them ?

Here’s the mural. See if you can recognize and name each individual (we’ve added the answers below along with some background as to the reason they are so famous) 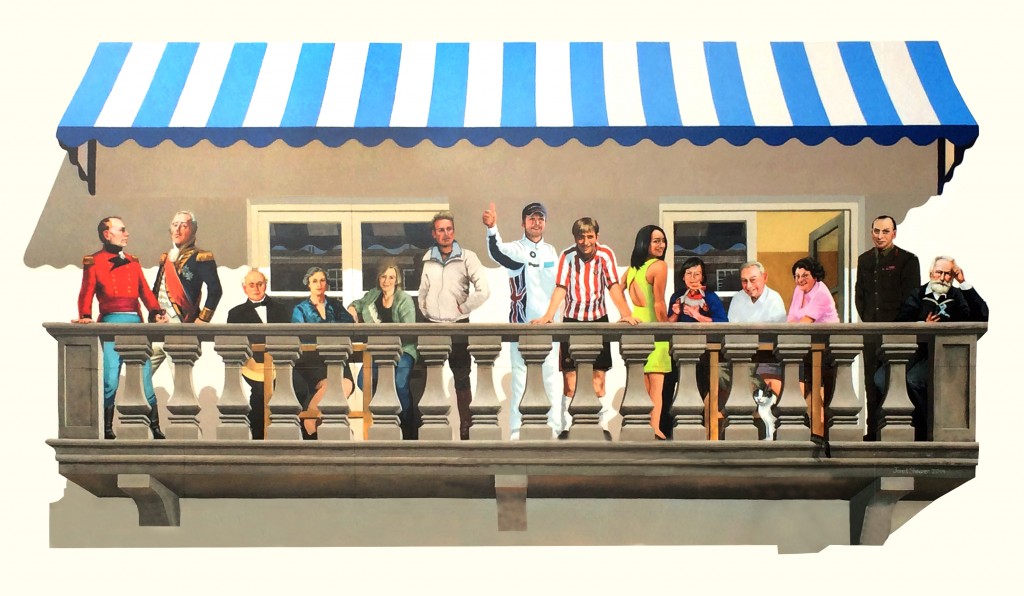 THE ANSWERS (from left to right)

A British Army officer and administrator. Brock was assigned to Canada in 1802.. He was promoted to major general, and became responsible for defending Upper Canada against the United States. When the War of 1812 broke out, the populace was prepared thanks to Brock, and quick victories at Fort Mackinac and Detroit defeated American invasion efforts.

Brock’s actions, particularly his success at Detroit, earned him a knighthood, membership in the Order of the Bath, accolades and the sobriquet “The Hero of Upper Canada”. Brock died at the Battle of Queenston Heights, which was nevertheless a British victory.

Born to one of Guernsey’s oldest families he was an admiral of the British Royal Navy notable for his victory at the Battle of Algeciras. Saumarez and Horatio Nelson served together in 1797 and 1798 but their relationship was not a close one.

In fact on a number of occasions it became quite strained the two often clashing on tactical decisions. Saumarez served on many ships of the fleet during his very distinguished career including HMS Victory.

Was a printer from Guemsey who, from modest beginnings, founded De La Rue pic, a printing company which is now the world’s largest commercial security printer and papermaker. His company was the first to be given the rights to print playing cards in 1831.

You can read more about him in our article The Guernseyman who prints the World’s Money.

Was Dame of Sark from 1927 until her death,. Her tenure as dame saw the German occupation of the Channel Islands in the Second World War, during which she refused to evacuate and convinced the islanders to stay as well. Her eldest son and heir apparent, Francis William Beaumont, was killed in 1 941, while her husband was deported to a Nazi concentration camp in 1943. Hathaway remains best known for her indomitable conduct during the occupation. After the war, she continued her publicity campaign, strengthening the island’s tourism industry.

Sarah was born to John Montague and Mary (nee O’Malley) and attended Blanchelande College. She is a journalist best known for her work on BBC Radio 4 as one of the regular presenters of the Today programme.

Carl was born in Sark and educated at Elizabeth College In 2012 Cari was selected with three others to represent Team GB at the 2012 Summer Olympics in London in the Individual and Team Dressage events. The UK dressage team won the gold medal with Hester riding Uthopia. In the New Year Honours 2013 Hester was appointed as a Member of The Most Excellent Order of the British Empire for services to equestrianism.

A Guernsey-born English former professional footballer and football television presenter. He works as a football pundit for Sky Sports and was the first the honorary president of Guernsey F.C.

Le Tissier spent his entire professional dub career with Southampton and gained eight caps for the England,national football team before turning to non-League football in 2002. In spite of interest from clubs such as Tottenham Hotspur in 1990 and Chelsea in 1996 Le Tissier remained at Southampton for his entire professional career, his loyalty garnering special affection from Southampton’s fans who nicknamed him “Le God”.

A British female tennis player and the British No 1 . Born in Guernsey and educated at The Ladies College. Heather trained and lived at the Nick Bollettieri Tennis Academy in Florida, United States. In her junior career, Watson won the US Open and gold at the 2008 Commonwealth Youth Games. She had been as high as No. 3 in the world on the ITF Junior Circuit.

Was a British author of children’s books, best known for creating the Wombles. Born into a family with many literary connections, she worked as a journalist but stmggled for success until she created the Wombles in the late 1960s. The strong theme of recycling was particularly notable, and the Wombles became very popular with children across the world.

While Beresford produced many other literary works, the Wombles remained her best known creation. Beresford and her family moved to Alderney in the mid-1970s.

Andre Sendlhofer was born in Austria in 1929 and firstcame to work in Guernsey in 1952. He met Sheila (then Parker) and they married n 1954. ln 1956 together with Sheila’s parents they took over the lease of Moores Hotel. Over the next years they bought Le Chalet and De Havelet Hotels, and then were able to buy Moores in 1976. They added Les Rocquettes to the group in 1996 and parted with Le chalet in 2006. Andre Passed away in 2012. Their daughter Karel Harris is the current Managing Director of the Sarnia Hotel group.

Dillon was often spotted strolling around town and was a frequent visitor to Moores where he had his favorite chair reception for snoozing! Sadly he died early in 2014.

Born in Guernsey and educated at Elizabeth College, Herbert was a British recipient of the Victoria Cross, the highest and most prestigious award for gallantry in the face of the enemy that can be awarded to British and Commonwealth forces. Initial reports from other wounded soldiers suggested that he had been killed in action, and he was awarded the VC posthumously. He was later discovered to have survived, being taken prisoner and was in hospital in Italy. He was repatriated in 1943, and awarded his VC at a ceremony in Cairo.

Was a French poet, novelist and dramatist of the Romantic movement. He is considered one of the greatest and best known French writers. In France, Hugo’s literary fame comes from his poetry, but also rests upon his novels and his dramatic achievements. Outside France, his best known works are the novels Les Miserables, 1862, and Notre Dame de Paris, 1831 (known in English as the Hunchback of Notre Dame). Hugo settled with his family at Hautevill House in St Peter Port where he would live in exile from October 1855 until 1870.