Home » History » Onward Christian Soldiers : When the Salvation Army took on the Nazis – In Guernsey

Onward Christian Soldiers : When the Salvation Army took on the Nazis – In Guernsey 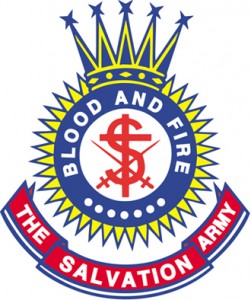 The German Occupation of the Channel Islands is a dark period of the island’s history. A time of hardships, repression, summary arrest, imprisonment and execution. A time when slave labourers were worked to death in the islands to help complete Hitler’s Atlantic wall defence system. The only part of the British Isles to be occupied, it was so heavily fortified that it created a situation where practical resistance was virtually impossible.

And yet small acts of resistance were made: wireless sets hidden to listen to the BBC news; underground news papers distributed; petty acts of sabotage on German equipment; hiding Jews and escapes by boat to the UK mainland. However one courageous member of the Salvation Army, Major Marie Ozanne, stands out. The remarkable moral stance she took during the German Occupation of Guernsey was one which ultimately may have cost her life. 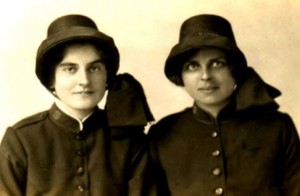 Major Marie was born in 1906 in the Vale where she went on to became a faithful member of the Salvation Army St Sampson’s Corps.

She trained as an officer (that is, a vicar in the Salvation Army) where she rose to the rank of Major. When war broke out in 1939 Major Marie found herself serving at a Belgian Corps. Upon hearing of the outbreak of war she returned home immediately to lead the St. Sampson Corps in Guernsey.

When the German army took over the island in June 1940, they ordered The Salvation Army to be disbanded. Its worship services were forbidden, and its officers forbidden to wear uniforms. The Commandant even forbade the army band to perform.

However, Major Marie refused to kowtow to the new German authorities. She wrote to the Commandant saying that she refused outright to close the St. Sampson Corps. She made public protests against the closure of the corps and continued to preach the Scriptures in public in her uniform – intriguingly the Germans referred to her in Occupation documents of this period as simply a “lunatic and religious fanatic.”

Finally, exasperated with her stance, the Commandant personally directed Major Marie to give up her uniform. When she again ignored this order, the military police arrested her and forcibly took it from her. Yet, in street clothes, she continued preaching the word of God, in defiance of the Commandant’s orders. She even began to teach herself German in order to minister to any of the German soldiers who might listen.


Marie Takes it to the Next Level 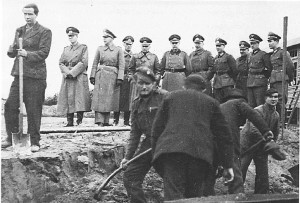 Hitler was obsessed with the Channel Islands and directed Organisation Todt, the organisation responsible for building the ‘impregnable’ Atlantic wall from Norway to Spain, to turn the islands into anchored battleships.

Slave labour poured into the island to be worked to death building bunkers and gun emplacements, all of this visible to the horrified civilian population.

Major Marie could not and would not let this stand and so she illegally started offering food and comfort to the “sub-human” Jewish and Slavic slave labourers who’d been transported from Eastern Europe. The labourers wore rags around their feet for shoes and had to subsist only on watery soup. Marie boldly preached against their ill treatment and made direct protests to the German commandant.

Later, when Hitler ordered 2,000 (mostly British) residents not born on the Islands to be deported to prison camps in Germany, she protested again.

She even volunteered twice to replace islanders selected to be shot for reprisals, but was turned down.

In 1942 she was arrested and imprisoned for several weeks. After her release she was admitted to hospital: her health, already frail, was further undermined by her time in prison. Despite several operations, Marie died in February 1943 aged 37.

In 1947 Major Marie Ozanne was posthumously admitted to the Order of the Founder, the Salvation Army’s highest honour. Her award cites her for maintaining

“an outstandingly brave witness for God and for Salvation Army principles” and a “self-sacrificing concern for men’s freedom to serve God.”

Today a section at the Island German Occupation Museum is devoted to her life’s work. In addition in February 2013, on the 70th anniversary of her ‘Promotion to Glory’, a historical marker was placed on her childhood home. It simply reads:

“A resistor to oppression lived here.”