The song “Sarnia Cherie” is arguably Guernsey’s most well known “Unofficial Anthem”. It gets sung on numerous ‘patriotic’ and sporting events from Liberation day on 9th May each year to the Island Games medal ceremonies. But if you look at the lyrics it isn’t extolling any particular patriotic fervour of people on the island but rather a melancholic longing of someone who is far from Guernsey shores.

The song lyrics were written by George Deighton in 1911, with Domenico Santangelo composing the tune later that same year.

George Deighton wasn’t even a native Guernseyman – he’d arrived in the island in 1908 aged 39 to manage the St. Julian’s Theatre. Falling in love with the island he wrote a poem 3 years later when he was about to leave the island. He asked Domenico Santangelo to write music for it, which he did, composing a romantic waltz to accompany the lyrics.

It was in Deighton’s St Julian’s Theatre, in November 1911, that the song was premiered to a local audience.

The song must have been a hit for over the years the demand for Sarnia Cherie steadily grew, especially among local people who sent copies to friends and relatives settled overseas. However it was the Second World War and the occupation of Guernsey that was to propel it to an even higher regard.

Most people today will probably only know the rather catchy chorus , buts its full lyrics are as follows :

Verse 1 :
Sarnia; dear Homeland, Gem of the sea.
Island of beauty, my heart longs for thee.
Thy voice calls me ever, in waking, or sleep,
Till my soul cries with anguish, my eyes ache to weep.
In fancy I see thee, again as of yore,
Thy verdure clad hills and thy wave beaten shore.
Thy rock sheltered bays, ah; of all thou art best,
I’m returning to greet thee, dear island of rest.

Chorus :
Sarnia Cherie, Gem of the sea.
Home of my childhood, my heart longs for thee.
Thy voice calls me ever, forget thee I’ll never,
Island of beauty. Sarnia Cherie.

Verse 2 :
I left thee in anger, I knew not thy worth.
Journeyed afar, to the ends of the earth.
Was told of far countries, the heav’n of the bold,
Where the soil gave up diamonds, silver and gold.
The sun always shone, and “race” took no part,
But thy cry always reached me, its pain wrenched my heart.
So I’m coming home, thou of all art the best.
Returning to greet thee, dear island of rest.

Its plaintive yearning neatly summed up the predicament of those forced the leave the island by the invading Germans in June 1940. But it was also adopted and sung on numerous occasions by those trapped on the island – no doubt using it to bond them together and expressing a longing for the better times that surely must come after the long hoped for liberation.


Guernsey had its own way of standing together against tyranny on their own island.

The evacuees in England similarly used it as a rallying point to their “Guernseyness” and their longing to come home.

After the evacuation Channel Island Societies sprung up all over the UK, formed by the thousands of evacuees (over 17,000 – nearly half the population – from Guernsey alone). They provided a meeting point for Channel Islanders to swap stories & snippets of information gleaned from family & friends left on the island.

From 1941 onwards, for 4d a month, you could buy a “Channel Islands Monthly Review“. It reported on the state of affairs in the islands, how the population were being treated, privations and printing snippets of telegrams and red cross messages sent in by subscribers.

In the September 1942 Review they even published the lyrics of Sarnia Cherie. Of interest though are the reports of the proceedings of all the Societies dotted around the UK with repeated reports of meetings ending with lusty renditions of “Sarnia Cherie”.


Such was the popularity that in 1942 Santangelo, the tunes’s composer, received a message through the Red Cross from an English friend Eric Douglas. The message had been passed, with surprising amiability, by the strict German authorities, and appeared in the Guernsey Evening Press on 26 March of that year, under the heading : “Sarnia Cherie sung throughout England” :

“Congratulations on Sarnia Cherie being sung throughout England as accepted national anthem and rallying song for exiles. Delighted you are continuing music. Greetings to all“


When the long hoped for liberation finally came “Sarnia Cherie” was there to help with the celebrations. Douglas Willis, a BBC war correspondent, sailed with the liberating forces into St Peter Port on HMS Bulldog. When Willis asks the crowd “Give us a song – what will you sing” ~ the reply came instantly “Sarnie Cherie !“


Below you can hear the crowd lustily singing Sarnia Cherie on 9th May 1945. 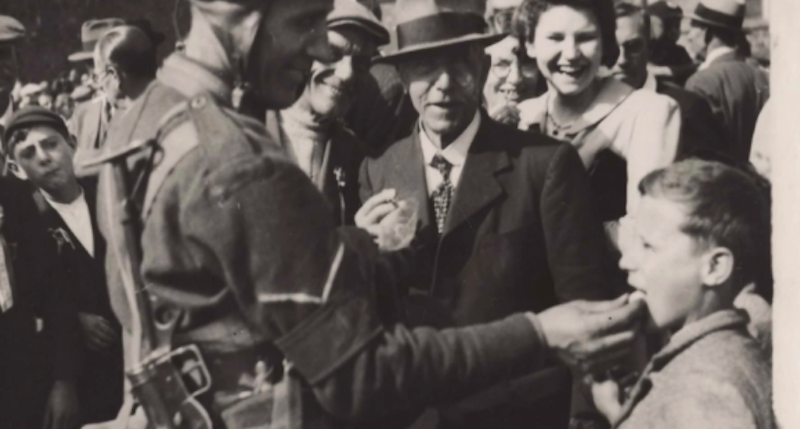