A bird in the hand is worth two in the bush

Definition: It’s better to have a small real advantage than the possibility of a greater one.

Origin: This proverb refers back to mediaeval falconry where a bird in the hand (the falcon) was a valuable asset and certainly worth more than two in the bush (the prey).

Definition: To an excessive degree; beyond reasonable or acceptable limits.

Origin: In the First World War the phrase was used by the British to describe the infantry emerging from the safety of their trenches to attack the enemy across open ground.

More recently, with allusion back to the WWI usage, the phrase has come to describe excessive or foolhardy actions.

More recently the phrase is often shortened to OTT.

Definition: A paradox in which the attempt to escape makes escape impossible.

Origin:This phrase is very modern in it’s origin and comes from Joseph Heller’s novel of the same name, written in 1953 and published in 1961. The first chapter was also published in a magazine in 1955, under the title ‘Catch-18’.

The paradox is presented as the trap that confined members of the US Air Force into staying on active combat service. In logical terms the ‘catch’ was that, by applying for exemption from highly dangerous bombing missions on the grounds of insanity, the applicant proved himself to be sane (after all, that’s what any sane person would do). If anyone applied to fly they would be considered insane. Either way; sane or insane, they were sent on the missions. This might be described logically as, ‘damned if you do and damned if you don’t’, ‘the vicious circle’, ‘a chicken and egg situation’, or ‘heads I win, tails you lose’.
In the book, this is explained thus:


Yossarian looked at him soberly and tried another approach. “Is Orr crazy?”
“He sure is,” Doc Daneeka said.
“Can you ground him?”
“I sure can. But first he has to ask me to. That’s part of the rule.”
“Then why doesn’t he ask you to?”
“Because he’s crazy,” Doc Daneeka said. “He has to be crazy to keep flying combat missions after all the close calls he’s had.
Sure, I can ground Orr. But first he has to ask me to.”
“That’s all he has to do to be grounded?”
“That’s all. Let him ask me.”
“And then you can ground him?” Yossarian asked.
“No. Then I can’t ground him.”
“You mean there’s a catch?”
“Sure there’s a catch,” Doc Daneeka replied. “Catch-22. Anyone who wants to get out of combat duty isn’t really crazy.”
There was only one catch and that was Catch-22, which specified that a concern for one’s safety in the face of dangers that were real and immediate was the process of a rational mind. Orr was crazy and could be grounded. All he had to do was ask; and as soon as he did, he would no longer be crazy and would have to fly more missions. Orr would be crazy to fly more missions and sane if he didn’t, but if he was sane he had to fly them. If he flew them he was crazy and didn’t have to; but if he didn’t want to he was sane and had to. Yossarian was moved very deeply by the absolute simplicity of this clause of Catch-22 and let out a respectful whistle.
“That’s some catch, that Catch-22,” he observed.
“It’s the best there is,” Doc Daneeka agreed. 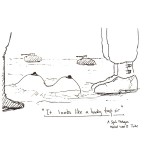 Origin: Booby has been in use meaning dunce since at least the late 17th century. A ‘booby trap’ was originally understood to be a practical joke – not necessarily anything dangerous. This meaning of ‘booby trap’ is similar to the notion of April Fool, i.e. the joke was such that only a naive ‘booby’ would fall for it.

By the early 20th century things had got much more serious. By then, traps that could, and were intended to, kill were also called booby traps.

E. F. Wood, in Intelligence Officer, 1917:”‘Booby’ traps were sprinkled about the country in the form of bombs.”

P. Gibbs, in From Bapaume to Passchendaele, 1918: “The enemy left ‘booby-traps’ to blow a man to bits or blind him for life if he touched a harmless-looking stick or opened the lid of a box.”

Origin: In the 16th century ‘square’ meant ‘fair and honest’ so ‘fair and square’ is tautological. George Puttenham used that meaning of square in The arte of English poesie, 1589:
“[Aristotle] termeth a constant minded man – a square man.”

Definition: Close enough to go directly to a target.

Origin: In the Late Middle Ages, when ‘point-blank’ was coined, archery and artillery targets were usually white. ‘Blank’ derives from the French ‘blanc’, which of course means white. ‘Point’ is a little more ambiguous. What was first meant by ‘point-blank range’ was rather more precise than our current meaning. Then, as now, it meant ‘too close to miss’, but the specific meaning was ‘within the distance that a missile travels in a direct line, with no perceptible drop due to gravity’. The ‘point’ in the term may have referred to the point of the arrow that was about to be fired – if the point coincided with the target in the archer’s eyeline then the target would be hit, so long as it was within ‘point-blank range’. Another interpretation is that ‘point’ was a verb and that ‘point-blank’ just meant ‘pointing at the (blanc) target’.

Into the 17th century and the ‘direct level flight’ meaning was alluded to by no less an author than Sir Walter Raleigh, in The History of the World, 1614:

Training his Archers to shoot compasse, who had bin accustomed to the point blanke.

Note: Compass meant ‘curved’, as in the flight of an arrow over a long distance.

The figurative ‘direct and blunt’ meaning that we now often use is found in phrases like ‘asked/denied/refused pointblank’ came into use around the turn of the 17th century and was listed in John Florio’s English/Italian dictionary A worlde of wordes, 1598, in which he equates ‘forthright’ with ‘point blanke’.