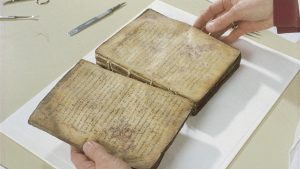 Any Bibliophile will appreciate, or at least empathise (if you’ve never had the opportunity), the exquisite pleasure of gazing upon an ancient book or scroll and reading the words engraved on its pages hundreds or thousands of years ago. You can imagine the author, or the copyist Monk, hunched over in a scriptorium or ancient study imparting their thoughts, beliefs and philosophies onto the precious vellum, papyrus or clay tablets. You have the possibility of peering into the minds of people long dead, all of whom had very different viewpoints and experiences of life and the world around them to us today.

Sadly though, time is not always kind to written materials and many fade away, have been damage or ‘re-purposed’ by later generations. So whilst you can physically connect back to their time through the artefact, you can’t connect to their minds or thoughts. That is, until very recently, where almost miraculous advances in technology can open the door again onto ancient texts we were thought long closed to us.

One such lost text is the Archimedes Palimpsest. It is the oldest surviving transcript of the work of the ancient Greek mathematician Archimedes. It was laboriously copied out as a manuscript in the 10th century but unfortunately during the 12th century a pious owner recycled it into a prayer book by scraping off the ink and replaced maths with miracles!


Another such lost treasure is the German cartographer Henricus Martellus’ map of the world, which was likely used by Christopher Columbus on his 1492 expedition to the Americas.

The Lazarus Project has a secret to reading invisible ink: capturing it with multi-spectral imaging.

It was sometime around the year 1491 that this ‘map of the world’ was produced, where Martellus noted all the wildest rumours about the locations he charted out. For instance: text over south Asia claimed that the Panotii people of the region had ears so big they could curl up and sleep in them; a cartouche over the Indian Ocean warned of “a sea monster that is like the sun when it shines, whose form can hardly be described, except that its skin is soft and its body huge” – which experts think is a description of orca whales. Japan was labelled with the tantalizing note “precious stones are found on these islands.” The reason we know of this at all is down to the emergence of these new techniques.

So back to the Archimedes Palimpsest, it is now possible to read it again, almost a thousand years later, with the help of X-rays. Scientists at the Stanford Synchrotron radiation laboratory in California used a beam of concentrated X-rays produced by a particle accelerator to see through the prayers on the pages, plus some twentieth-century repair work, to disclose the original mathematical marvels hidden beneath. The technique works by exciting iron atoms in remnants of the original ink, causing them to glow and create a sharp image which the researchers can read.

The Martellus Map : Before & After X-Raying