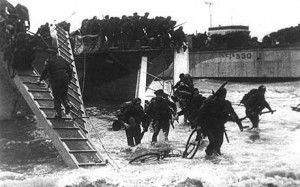 The 6th of June 1944 is one of those pivotal dates in History that will always be remembered as a turning point in human history. 2014 will be the 70th anniversary of this “day of days”. In this article we look at some D-Day Factoids.


What does the D in D-Day stand for ?

On 6 June 1944, 156,000 Allied soldiers headed to the shore in Normandy), as part of Operation “Overlord” the code name for the entire Allied invasion of north-west Europe. Not all of the soldiers landed on the beaches on that day. However that day became famously known as D-Day.

The reason behind this is : When a military operation is being planned, its actual date and time is not always known exactly. The term “D-Day” was therefore used to mean the date on which operations would begin, whenever that was to be. The day before D-Day was known as “D-1”, while the day after D-Day was “D+1”, and so on. This meant that if the projected date of an operation changed, all the dates in the plan did not also need to be changed.

This actually happened in the case of the Normandy landings. D-Day in Normandy was originally intended to be on 5 June 1944, but at the last minute bad weather delayed it until the following day.


The Biggest Military Operation Ever

In the planning and lead up to the Allied invasion of Europe in 1944, secrecy was paramount. A huge security blanket covered every aspect of the operation, including the exact place and date. Code names and acronyms became vital. These are just a few …