The Battle of Jersey 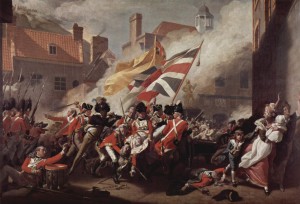 Guernsey and Jersey, along with the other Channel Islands lived, for hundreds of years right on the front line of conflict between Britain and France. Islanders had to train and be ready to fight to defend their homes at a moments notice. To do this local militias were formed in all the islands. The British also provided significant amounts of weapons, training and manpower in the form of Regiments based in the islands as well, proof of the strategic importance the Channel Islands held. In addition all the islands built gun batteries, forts and redoubts at strategic points all around their coasts.

Early on 6th January 1781 this threat went from ‘potential’ to ‘actual’ when a French force landed undetected in Jersey. The ensuing conflict became known as “The Battle of Jersey”. 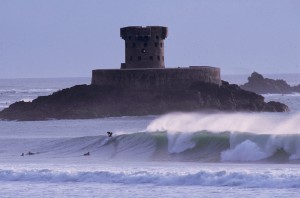 The Royal Militia of the Island of Jersey, comprised some 3000 men in five regiments, including artillery and dragoons. Regular army units—the entire 95th Regiment of Foot, five companies each of the 83rd Regiment of Foot (Royal Glasgow Volunteers) and 78th Highlanders, and around 700 “Invalids” (semi-retired reservists)—were also present. The total force amounted to about 9,250 troops of all types. A naval force, the “Jersey Squadron”, was also based in the island, but was on a cruise against the Dutch at the time of the invasion.

At the time of the invasion the American War of Independence was raging. France, ever the implaccable enemy of Britain, was supporting the rebels.

Both Jersey and Guernsey made a healthy living as bases for privateers, privately armed vessels licensed by the British Government to attack French (& American) shipping. Jersey privateers were even operating off the coast of America. The French government was determined to neutralize this threat.

Officially it was a private affair … but several hundred regular troops werer orderd to ‘desert’ to De Rullecourt’s forces.

The plan to invade Jersey was put forward by Baron Philippe de Rullecourt, a 36-year-old adventurer and a colonel in the French Army. Officially the expedition was a private affair; however, funding, equipment, transport and troops were provided by the government. In order to conceal their involvement, the government went so far as to order the ‘desertion’ of several hundred regular troops to De Rullecourt’s forces.

the (Jersey) guards had abandoned their post to go drinking

On 5 January 1781 the expedition, consisting of some 2,000 soldiers in four divisions, set out. Jersey still celebrated 6 January as ‘Old Christmas Night’, and the French landed undetected. The 800 men of the first division landed at La Rocque, Grouville, and passed close by the guards without being noticed; a French officer even said that he had slept beneath the guards, but the guards had not heard the French. The guards were subsequently put on trial, where it was found they had abandoned their post to go drinking. The French first division stayed there most of the night. The 400 men of the French second division landed amongst rocks and were entirely lost. The boats that contained the third division, consisting of 600 men, were separated from the rest of the fleet and were unable to join it. The fourth division, consisting of 200 men, landed early in the next morning at La Rocque. The total of the French troops landed on the island was therefore about 1,000, half the number of soldiers that France had expected to take into battle.


The Battle of Jersey

Between 6 & 7 in the morning on 6 January, the first division set up defensive positions in the market while most of the town was asleep. At about 8 o’clock a French patrol surprised the island’s governor, Moses Corbet, in bed in Government House. De Rullecourt convinced Corbet that thousands of French troops had already overwhelmed Jersey and threatened to burn the town and slaughter the inhabitants if Corbet did not sign a capitulation. Corbet resisted at first but eventually agreed to sign the order.

With Corbet a prisoner, the next senior-most British commander was the 24-year-old Major Francis Pierson. The British troops and militia assembled on the Mont ès Pendus (now called Westmount) and Peirson soon had 2,000 men at his disposal, with which he resolved to descend the hill and attack. The French, who were camped in the market, had seized the town’s cannons and had placed them at the different openings to the market to fire on the British troops if they approached.

Since they do not want to surrender, I have come to die.
Phillipe de Rullecourt

Major Peirson detached the 78th Regiment of Foot and sent them to take possession of the Mont de la Ville (now the site of Fort Regent), to block any French retreat. Once Pierson believed that the 78th had reached their destination, he ordered his remaining troops to attack. However the British were stopped at the plain. De Rullecourt continued to bluff demainding that the British surrender. When they refused de Rullecourt was heard to remark: “Since they do not want to surrender, I have come to die.”

The British attack began. The British had so many troops that many British soldiers having nothing to shoot at, fired most of their shots into the air. 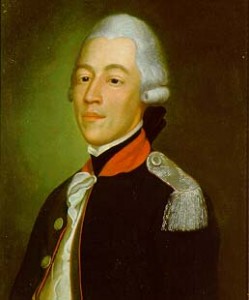 The French resistance was of short duration, most of the action lasting a quarter of an hour. The French only fired the cannons that they had at their disposal once or twice. The British had a howitzer placed directly opposite the market in the Grande Rue, which at each shot “cleaned all the surroundings of French”. Major Pierson and the 95th Regiment advanced towards the Avenue du Marché; just as the British were about to win, Major Pierson was killed by a musket ball in the heart, but his saddened troops continued to fight. When de Rullecourt fell wounded, many French soldiers gave up the fight, throwing their weapons and fleeing; however, others reached the market houses, from where they continued to fire.

De Rullecourt still tried to bluff his way out and and through Corbet, told the British that the French had two battalions and an artillery company at La Rocque, which could be at the town within a quarter of an hour. The British were not intimidated, knowing that the number of French troops there was less than 200. The main French force surrendered with some of the remaining French soldiers dispersing themselves throughout the countryside to reach their boats, though several were caught while trying to do so.


The Enemy Within – Treason Uncovered in Jersey

It became notorious that there were traitors among the British. Ferdinand Tupper in his “History of Guernsey and Occasional Notices of Jersey” notes that

“On Christmas night, 1780, a fire was discovered blazing between Rozel and La Coupe, in Jersey : it continued burning for about eight minutes, when it was answered by another on the coast of Normandy. These preconcerted signals were made at a time when no British ships of war were on the station, so that the island had at least one traitor within, as well as national enemies without.”

Certainly De Rullecourt possessed a plan of the fortifications, the towers, the cannons and so on, saying that without good friends in Jersey, he would not have come. The French knew the exact number of British troops and militia, the names of the officers commanding them, and more. In the papers found in the General’s trunk was the name of one Mr. Le Geyt, a Jerseyman who was later seized, as was another suspect.