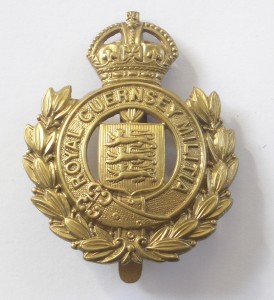 At the beginning of the First World War the Channel Islands were still being defended by regular British Army units – with Regiments being stationed in the islands for several years at a time – and by the local Militias. Militia service in Guernsey was still compulsory for all men in the island. However since 1204 – when King John lost the Duchy of Normandy to the French and the Channel Islands were granted ‘rights and privileges’ to govern themselves – islanders could not be compelled to serve overseas ‘except to rescue the Sovereign if captured by enemies’

People across Britain and in the island were keen to ‘do their bit’ for king and country. So it was against this backdrop that in October 1914 the States of Guernsey decided to offer volunteers from the Militia to serve overseas. As part of the agreement to offer these men, these ‘sub-unit’s were to be kept together with a Guernsey identity.

The original intention of the States was to offer two infantry Companies from the Militia and a battery of heavy Artillery from the Royal Guernsey Artillery. The latter was eventually amended to be a Divisional Ammunition Column.

In this article we look at an outline of the events that these brave volunteers went through in the course of serving in the Divisional Ammunition Column they were assigned to. The story of the two infantry companies is the subject of another article, “The Guernsey Irish”.