Home » Science » The Moon Really IS Made of Cheese

The Moon Really IS Made of Cheese 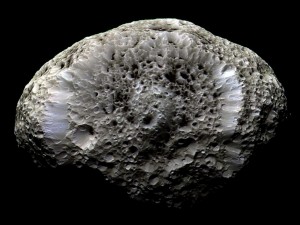 When we say ‘the Moon’ we don’t mean OUR moon but another in our solar system. Researchers in the U.S. have got a close look at what they’re calling ‘the weirdest moon in the solar system’, and they’ve even managed to weigh it! The moon in question is one of Saturn’s moons – Hyperion.


The first close-up views of Saturn’s moon were obtained using the Cassini spacecraft, which arrived at Saturn in 2004, and it’s certainly a strange body. Rather than twirling gracefully around its parent planet like our moon orbits the Earth, Hyperion’s an irregular shape and tumbles chaotically through space. But what’s really got the space scientists intrigued is its surface, which is peppered with pristine looking impact craters and more holes than the Titanic!

In fact it looks rather like a piece of sponge that someone lifted out of a giant ocean. The team think that it’s down ta the moon’s gravity , or rather lack of it. By measuring the gravitational pull of Hyperion on Cassini as it flew past, they were able to calculate the moon’s weight – 5.6 million billion tonnes – and therefore also its density. This showed that, just like Swiss cheese, it is 40% empty space. Consequently when objects collide with the moon and punch a hole, rather than the debris settling out over the surface and giving it a smooth appearance, the low gravity allows the ejecta to disappear into space.