Around midnight on Sunday 29 December 1672 the Governor of Guernsey, Viscount Christopher Hatton, was suddenly awoken – by hailstones on his face. His mother lay dead beneath the remains of a ceiling and his house lay in ruins around him. This was the night that Castle Cornet literally exploded around its’ occupants.

During all of that Sunday evening a fierce storm from the South-West had been lashing Guernsey. At Castle Cornet that night, the windows would have been rattling – but amazingly several people slept right through what happened at around midnight.

Lightning struck the castle’s magazine, housed in the donjon or keep, the oldest part of the fortress, unleashing the deadly force of all the stockpiled gunpowder. In minutes the donjon and the buildings surrounding it were reduced to rubble. The explosion killed seven people including the wife and mother of the Governor, Lord Hatton, and completely altered the appearance of the upper part of the Castle forever, destroying the keep, chapel and Governor’s residence. 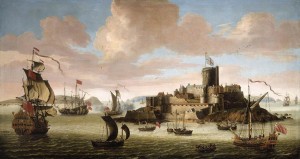 17th Century Portrait of Castle Cornet with the Donjon

The Governor Sir Christopher Hatton, who was blown, still alive and in his bed onto an outer wall, his two sisters, several soldiers and a prisoner and his family, all survived their injuries. Hattons mother the lady Dowager, his steward William Prole and Ensign Covert were crushed to death by falling debris. Hatton’s young wife Cecilia, who had run into the nursery to pray, was also killed, along with her serving woman, a young girl, and the dry nurse Mistress Willis. The latter had Lord Hatton’s daughter Ann in her arms and her hand on baby Margaret’s cradle. Miraculously the two children escaped unhurt. 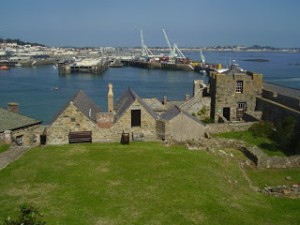 Site of the Donjon Today

The Guernsey Court ordered a day of fasting and it was forbidden to buy anything cleared from the debris. Thirty men were sent daily to clear the site and the deaths were registered in the Town Church. The bodies of the Dowager Lady Elizabeth Hatton, and Lady Cecilia Hatton were embalmed and sent to Westminster to be buried in the tomb of the 1st Lord Hatton.


Today 3 accounts of the Explosion are known to exist. The following extracts are taken from an anonymous account found amongst the manuscripts in the British Museum.

My Lord Hatton was at that time fast asleep in bed, lying by himself in a Chamber that Stood North from the Magazine & very near It. This house was wholly rais’d from the Ground, & most of It blown over the wall, & his Lord himself thrown in his Bedd upon the battlements of a Wall that stood very near it, fast asleep. And was not awakened But by a Shown of hail and rain, which beating on his face made him Soon Sensible of that Danger wherin he was, but in this is a most admirable Providence, for had he been awakened otherwise than this, he had without question been precipitated over the Wall.

My Lady Hatton frightened at the great noise of the thunder rise from her bed slipped on her nightgown, and calling up her Chambermaid who lay in the same Roome. Soon after they went into the Nursery, when they called upon ye Nursery maid in order to fall to prayer, but were prevented for at that very instant the Magazine was blown up and the Lady with one of her maids kill’d. She was found under the Rubbish, with her Skin beat from her brows, & Soe over the forehead & the head being turn’d up as far as behind her neck, in such a manner that all her head remain’d bone naked, and her legg broaken in two parts


From that time, no Governor has lived in Castle Cornet.