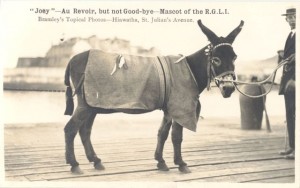 The First World War has become a byword for slaughter on an unimaginable scale. It changed the face of war forever. It was a war on an industrial scale where the railway and factory created a new mechanised form of killing.

Whilst the RGLI can be considered Guernsey’s ‘official’ response to the war it wasn’t the islands first.

In October of 1914 the States of Guernsey agreed to offer the war office formed units of militia volunteers : A double company of infantry and a Divisional Ammunition Column.

This was to prove extremely important when it came to the forming of the R.G.L.I. later on in the war, because most of these by then experienced and battle hardened men would be transferred back into the unblooded pals battalion that was the R.G.L.I.

Note : Photographs have been reproduced with kind permission of the Priaulx Library , the Imperial War Museum along with some photographs from the Quevatre family.

Note : For an overview of the other key events in the first World War refer to our article on the World War One Timeline.

Many Guernseymen had suffered years of captivity in Germany whilst many more carried home grievous wounds of both body and mind. The R.G.L.I. left behind them 327 graves in France. The war had been won, but at a terrible cost which was felt in every home in the Island.

The total number of men who served in the R.G.L.I. was 3,549 of whom 2,430 were recruited in Guernsey. The remainder were transferred from England.


THE FOLLOWING HONOURS WERE AWARDED TO THE R.G.L.I.: