H. Cecil Booth went with a friend to the Empire Music Hall in London to see an American inventor demonstrate his new dust removing machine. It was a box, with a bag on top supplied with compressed air. The air blew down into a carpet and made the dust blow up into the box. Booth didn’t think much of the idea: a lot of the dust went either side of the box and just settled back on the carpet. ‘Why don’t you suck out the dust?’ Booth asked the inventor, who became very angry. ‘It’s not possible, and in any case it’s been tried over and over again and no one has succeeded,’ he told Booth. Booth thought about this for several days, then, as he said later, ‘I tried the experiment of sucking with my mouth against the back of a plush seat in a restaurant in Victoria Street.’ So much dust came out he almost choked. I came to the conclusion’ he said, ‘that I could construct a machine to work by suction.’ 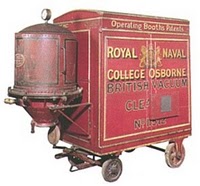 The machine Booth designed and patented in 1901 was so large that it sat on a trolley and had to be pulled along the street. There was a pump, a dust filter, and the power unit. One attendant worked the machine while another guided a long, flexible hose inside offices or houses to clean them. Booth made sure his pump created enough of a vacuum to suck out the dust embedded in and trapped underneath carpets and upholstery. Booth called his machine a vacuum cleaner. He was not in fact the inventor of the suction dust-removal machine, although at the time he did not know any of the details of the previous attempts to make a cleaner based on this method. No one has really agreed who invented the modern type of vacuum cleaner. The two earliest, called carpet sweepers, were invented in 1859 and i860. Although nothing came of these inventions, they turned out to be the prototypes of the two main designs used today. One relied on suction alone, the other used suction plus brushes to loosen the dirt.

Vacuum cleaners on little trucks like Booth’s were also invented and used in France. The Americans were the first to develop very large suction machines – a sort of central cleaning system – which were installed in the basements of buildings such as theatres, hotels and department stores. In England, Booth put one in the House of Commons. Pipes led up to outlet points for attachments which sucked dust down into containers. Before the First World War, smaller versions of these stationary machines were popular in rich people’s houses. Advertisements showed the lady’s maid using an attachment plugged into the wall to clean her mistress’s hat, a servant downstairs dusting his master’s coat, while other servants cleaned furniture and carpets all over the house.

But inventors were keen to develop a handy portable vacuum cleaner for home use. Otic of the first was patented in America as early as 1908; it was called the Electrical Vacuum Carpet Sweeper. It was made by a poor, sick, unsuccessful inventor called James Murray Spangler, who had been reduced to caretaking an office. He saw one of the huge stationary machines at work and thought up a small machine with a revolving brush to loosen the dirt, and suction to remove it. William Henry Hoover, who ran a tanning factory in Ohio, bought the rights to manufacture the machine, but Spangler died before the Hoover became famous.

The vacuum in some of the early portable machines was made by working a bellows up and down by hand. But it was the development of the small electric motor which really put the convenient home vacuum cleaner on the market.

It took a little while for people to realize the advantages of using a vacuum cleaner. They were too used to the dreadful drudgery of cleaning with dusters, brushes, and by carpet beating. Spring cleaning was a yearly horror. ‘It completely upset the household routine and comfort for weeks’ said H. Cecil Booth. All through the winter, mess from fires added to the general dust in a house. Spring sunshine revealed the grimy layers; so everything was covered, moved, beaten and shaken. But a lot of dust just settled back down again. There was no cleaning aid that could really get inside heavy curtain materials, carpets and upholstered chairs to dislodge the years of ingrained dirt.

Sanitation and health were already improved by the introduction of the vacuum cleaner. Tons of germ-laden dust were moved for the first time from theatre seats and shop floors. One of the first jobs for Booth’s original machine was to clean the great blue coronation carpet in Westminster Abbey before Edward VII’s coronation ceremony. During the First World War, Booth received an emergency call to take his machines to the Crystal Palace – that famous relic of London’s Great 1851 Exhibition. Naval Reserve men quartered inside the building were falling sick and dying from spotted fever. For two weeks, fifteen of Booth’s machines sucked up inches of dust from the floors and girders, walls and staircases of the old building. Twenty-six tons of dust were removed from the Crystal Palace and buried, and that was the end of the spotted-fever epidemic.