How Do Quartz Watches Work ?

Quartz watches – we all know of them, use them , rely on them – but have you ever stopped to wonder how they work ? How a mineral like quartz can possibly be used to keep acurate time? Well wonder no more, in this article we hope to lay bare some the secrets and mysteries of the little marvel on your wrist, the quartz watch.

Wobbly crystals in your clock

A piezoelectric disk generates a voltage when deformed

If you check the time right now then the chances are that you will have looked at a device that uses a quartz crystal. Many clocks and watches proclaim, in tiny letters on the face, that they are quartz clocks. But there will be no visible evidence of it, and even if you start pulling the timepiece apart you will be hard pushed to find any quartz at all !

Quartz is an extremely common substance: it’s the second most abundant mineral in the world. Every time you walk on one of Guernsey’s sandy beaches, most of that sand is made of quartz. Quartz itself is made of atoms of silicon and oxygen knitted together into a crystal. It has many desirable properties: it’s very hard; it’s transparent; it can be artificially manufactured, and it, the most pertinent of all – as far as this article is concerned, it displays an unusual effect called piezoelectricity.

In 1880, Pierre Curie, long before he became the husband of the famous Marie Sklodowska, discovered that if you squeeze a crystal of quartz it produces a tiny electric current. This was dubbed the piezoelectric effect and a year later Pierre Curie showed that it also worked in reverse. If you apply a current to a quartz crystal, its shape will deform ever so slightly. When you turn off the current, the crystal will return to its original shape and produce a little burst of electricity as it does so.

Wind forward (pun intended) about 30 years and researchers at the Bell Telephone laboratories realized that if you made tiny tuning forks out of quartz, you could get them to resonate by feeding them pulses of electricity.


Back to Quartz Clocks 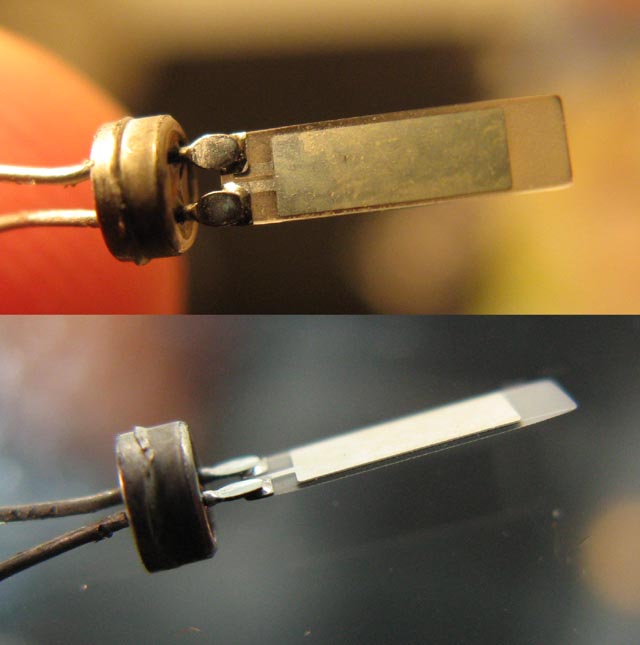 Inside a quartz clock is a tiny metal component a few millimetres (about 1/16 in) across. Inside this is a sliver of quartz crystal, usually circular these days, rather than tuning-fork shaped. When pulses of electricity are fed into this crystal it begins to vibrate, and these vibrations will be strongest at its resonant frequency. After each pulse of vibration, the crystal relaxes and emits a tiny pulse of electricity. If you use the frequency of electrical pulses coming out of the crystal to time the pulses going in, you will drive the quartz to vibrate strongly at precisely its resonant frequency. The quartz is shaped by laser cutters, so that it vibrates exactly 32,768 times a second, within a staggering 1/1000 of a vibration per second.

So, the reason that the number 32, 768 vibrations a second is chosen is partly because it’s in the range of frequencies within which it is easy to get quartz to vibrate but also, more importantly, if you divide this number by two, fifteen times, you end up with 1 vibration per second. Alongside the clever electronics that set up the resonance in the crystal is a second circuit that counts the pulses of electricity coming out of the quartz. Using repeated division by two, the circuit can produce an electrical pulse exactly once per second. From here it is just a matter of a tiny motor and simple gears to convert this pulse into the movement of the hands on a clock.


But, why are we Still Using this ‘old’ Tech?

You may be thinking that this is all well and good, but surely even this is old technology. Computers and smartphones automatically know the time by downloading it from the internet. While this is true, they still need to keep time and they will do this even without the internet. All our modern clocks and time-telling devices contain what is known as a realtime lock circuit, and inside this, vibrating at 32,768 times a second, is a tiny quartz crystal.