To Surf and Serve 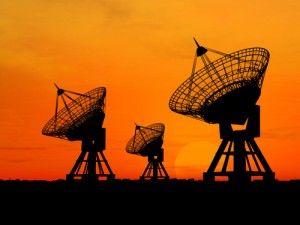 Have you ever had a hankering to be involved with some of today’s latest cutting edge scientific projects. Maybe rub shoulder with the teams searching for extraterrestrial intelligence, or join the hunt for very large prime numbers or test algorithms for predicting the three-dimensional shape of protein molecules from their linear formula?

Well it might surprise you to know that you can! Indeed your’re using the very thing that qualifies you to participate in such cutting edge research right now … your pc/laptop/mac.

The scientists running these projects, and a dozen or so others, are exploiting a hidden resource consisting of under-used computing time, amounting to millions of hours, which can augment their own computers in carrying out massive number-crunching tasks. For much of the time, even when we are sitting at them, our personal computers are lying idle.

One of the earliest projects to make use of this time is called SETI, standing for ‘Search for Extraterrestrial Intelligence’, which gathers a huge amount of celestial radio data every day from a device attached to a large radio telescope on the island of Puerto Rico. The data appear to be a kind of ‘white noise’ emitted randomly by stars and galaxies, but the hope is that one day among the noise will be a signal from an extraterrestrial civilization, which will be identifiable by some regularity rather than randomness. By downloading a simple piece of software, home computer users can help to analyse this data which is sent in regular bursts to each individual participant.

In fact, if you share to this task you can watch your computer as the software carries out its analyses … just imagine the moment when your computer spots a regular pattern and alerts the world by sending a message to SETI… well it could happen.

It was a clever idea and has been taken up by other scientists. With a large amount of data to process which don’t require more sophisticated software than the average home computer.

To participate you generally have had to apply to a project and download some software to take part.

Here’s a flavour of some of the distributed computing and grid computing projects that are out there :

There is a very ingenious project on the go that you probably already have participated in – use of your and my computer that doesn’t even require your consent or knowledge – sounds very sinister but is really quite innocuous.

Here’s how it works …

You may have noticed that sometimes when interacting with a website you are asked to read off the screen a distorted word or set of letters. This is done to ensure that there is a human being trying to use the site rather than a computer programme seeking to abuse online services in some way. These words or groups of letters are called CAPTCHA, standing for Completely Automated Public Turing Test to tell Computers and Humans Apart (see our article Can Machines think – CAPTCHA and the Turing test).

A new use for CAPTCHAs has emerged as a result of projects to digitize books and make their text available on the Internet. In the past this has been a labour-intensive task, using humans to read the books and transcribe them. More recently, a more cost-effective way has been to use optical charater recognition (OCR) software, which reads books automatically at high speed and turns them into word-processible text.

However the older the book, the more likely it is that the computer will have trouble reading it. A Victorian novel in tiny print on yellowing crinkled paper is going to present reading challenges to a computer that will cause no problem to a human reader.

This is where CAPTCHAs come in. Every day, humans type more than a hundred million of them, as they access websites. Computer scientists at the Carnegie Mellon University in Pittsburgh have shown how to use all this free effort by persuading some websites to use words as CAPTCHAs that computers have been unable to read while digitizing old books. In this way, with suitable safeguards to make sure that the readings are accurate by using the same word on different sites, they have created a system that does a job, the processing of unclear words, which would previously have required professional manual transcribers.

After a year of this project, Internet users had unintentionally deciphered nearly 500 million words

In comparing their system, called reCAPTCHA, with computer optical recognition, the scientists report an accuracy rate of 99.1 per cent, compared with 83.5 per cent for standard OCR. After a year of this project, Internet users had unintentionally deciphered nearly five hundred million words, which is equivalent to the indecipherable words from over 17,600 books.


So next time you’re presented with a distorted and semi- legible word on a website, try your hardest to read it, since you’ll be adding to the corpus of world literature on the Internet.