Home » General Interest » What Are The Differences Between British & American English?

What Are The Differences Between British & American English? 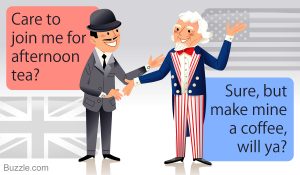 There is an old saying that America and Britain are “two nations divided by a common language.” No one exactly knows who said this, but it does seem to reflect how we Brits feel about American English.

But are American and British English really so divergent, and if so what are the key differences ?

The most obvious difference are accents. Whilst Britain has a vast range of different regional accents none are quite like any in the US. Likewise within the US there are some very different accents for instance consider the Texan and a New Yorker modes of speech.

It’s interesting to note that before and during the American Revolution, the English, both in England and in the colonies, mostly spoke with a rhotic accent.

See our article “How and When did the American Accent evolve?“

Another noticeable difference between American and British English is vocabulary. There are hundreds of everyday words that are different. For example, Brits call the front of a car the bonnet, while Americans call it the hood.

Americans go on vacation, while Brits go on holidays, or hols.

Fortunately, most Americans and Brits can usually guess the meaning through the context of a sentence.

See our article “When did the US start dropping the U from words such as colour?“

The differences below are only a general rule. It’s fair to say that American speech has influenced Britain via pop culture, and vice versa. Therefore, some prepositional differences are not as pronounced as they once were.


Past Simple vs Present Perfect

Americans tend to use the past simple when describing something that has recently occurred, while people in the UK are more likely to use the present perfect.

There are more difference but I think we’ve covered the most pertinent. However it’s worth pointing out that British and American English have far more similarities than differences. We think the difference between American and British English is often exaggerated. If you can understand one style, you should be able to understand the other style.