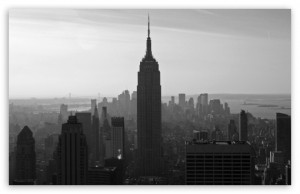 Skyscrapers are an American invention and for people all over the world skyscrapers stand for America. ‘How dare they build any- thing 102 storeys high?’ demanded visitors in 1930, as the Empire State Building went up in the centre of New York City, one storey a day, using 10 million bricks, having 6,400 windows, and visible 50 miles out to sea. Even today the Empire State is still one of the tallest buildings in the world. Thousands of people take the lifts to the observation platforms and peer straight down at the city and harbour below.

How dare they build anything 102 storeys high?

In the 1920s American businessmen raced each other to build daring, boastful, beautiful skyscrapers which would tell everyone who gazed up at them how successful and go-ahead their businesses were. The sixty-storey Woolworth Building dazzled everybody. It went up in 1913, and had spires and ornaments modelled on the Gothic cathedrals of Europe. Real estate men put higher and higher buildings on small blocks of land, and the value of each piece of ground went up and up.


Not One Mans Idea, but an inevitability

Skyscrapers were not the invention of any one man. But they could not have been built without the invention and development of the lift (see our article on the lift for more information), and the skeleton frame.

In 1887 passers-by in the city of Chicago had a nasty shock. Bricklayers were starting to lay the bricks of a new building half-way up. It didn’t make sense. Walls begin at the bottom, otherwise how else could buildings stand up? Ever since man began building, in stone, mud, wood or brick, walls had to be strong and thick enough to take the weight of floors and roof. The great cathedrals built in the Middle Ages, almost 30 storeys high some of them, had arms crooked out from the sides of the walls, called flying buttresses, to help take the strain. Castle walls were often fifteen feet thick at ground-floor level.

The building had a skeleton of iron and steel bar

But the architects of the Chicago building whose walls began half-way up were using a new method to give it the strength to stand. The building had a skeleton of iron and steel bars, riveted firmly together. The walls were ‘hung’, like curtains or clothes, to give privacy and protection from the weather, but not to hold the building up.

The frame of iron and steel carried the weight of the building, which, in turn, was borne by the foundations. In one way the new building was like an Indian tepee: a strong frame of poles tied firmly together, with the buffalo hide hung and stretched over it for protection from the weather. The same principle applies to our bodies; it is the skeleton that holds us up, not the outside wall of skin. 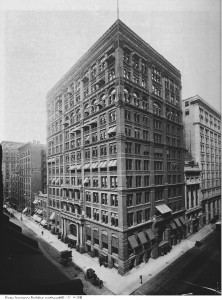 An architect called Major William LeBaron Jenney probably made the first building using a skeleton frame, in Chicago, in 1883. He was asked to design a fireproof office building with as much light and space inside as possible. He reckoned that a box of cast-iron columns and steel beams would take all the weight of the structure and leave the walls free for big windows. He hung the floors from the iron frame too.

Buildings stayed around five storeys high as long as people had to climb stairs. But with a lift, you could start scraping the clouds!


Today’s skyscrapers are steel-and-glass blocks turned on end. The highest building to date is the Burj Khalifa (also called the Burj Dubai) with a staggering 163 floors and 828m tall 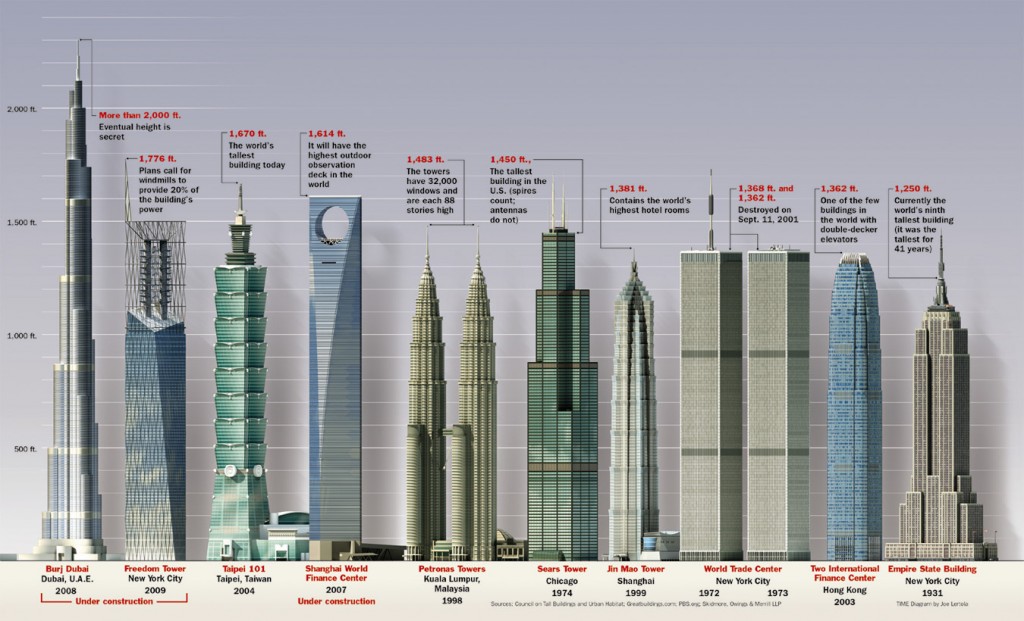