Home » General Interest » Why do we kiss under the mistletoe?

Why do we kiss under the mistletoe? 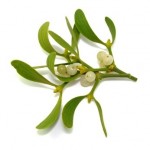 The innocuous mistletoe plant, now used to cop a cheap kiss or two, was once considered to be a sacred plant by the ancient Druids. They believed that it could cure sicknesses and shield its owner from evil forces such as witches or ghosts.

Druids gathered the plant at the northern winter solstice, just days before we now celebrate Christmas. With great solemnity and ritual, they cut the mistletoe with a golden sickle reserved solely for this purpose. The plant was so sacred that the Druids never allowed it to touch the ground. The Druids believed that by placing it over their doorways, they could not only protect the health and safety of all who passed through but also promote romance and fertility. If a boy kissed a girl under the mistletoe and gave her one of the plant’s white berries, the ritual meant they would get married within the year.

Ironically, although mistletoe is now associated with Christmas, the Christians in Celtic regions, ashamed of their pagan antecedents, did everything possible to dissociate themselves from the belief in the power of mistletoe. But the practice took hold. And although a kiss under the mistletoe no longer promises marriage, at least we’ve retained the fun part of the ritual.