5 Words Introduced to the English Language by Rudyard Kipling 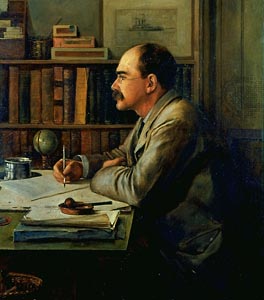 Shakespeare is often credited as a the most prolific contributor of many of the words we use today in the English language. However he’s not the only venerable writer to do so. Rudyard Kipling, author of The Jungle Book, was also a highly prolific contributor, coining and popularising many words and phrases still in use in modern English.

grinch ~ noun : a grumpy person who spoils the pleasure of others

“It’s woe to bend the stubborn back
Above the grinching quern,
It’s woe to hear the leg bar clack
And jingle when I turn!”

Dr Seuss would take up the word for his classic 1957 children’s book, “How the Grinch Stole Christmas”.

Born in Bombay in 1865, Kipling spent much of his childhood in India, and knowledge of Indian culture and the country’s various languages can be found in his work. The earliest known use of ‘cushy’ in a work written in English appears – as khushi – in a piece published by a young Kipling in 1887. He used it to mean ‘relaxed’, but it later came to mean ‘comfortable and undemanding’.

In original Urdu, the word means ‘pleasant’ or ‘good’.

old-school tie ~ expression : A bond of kinship between people who graduated from the same private school and help each other in the professional world.

“After which, it is only fair to tell you that I tied up my platoon on parade this morning owing to an exalted mentality which for the moment (I was thinking over the moral significance of Old School ties and the British social fabric) prevented me from distinguishing between my left hand and my right.”

Old-school tie refers to “a necktie that has the colours of a British public school”; “the upper-middle-class solidarity and system of mutual assistance attributed to alumni of British public schools”; and “the narrow clannish attitudes characteristic of the members of a clique.”

squiggly ~ noun : a short, irregular curve or twist, as in writing or drawing

“The squiggly things on the Parsee’s hat are the rays of the sun reflected in more-than-oriental splendour, because if I had real rays they would have filled up all the picture.”

Squiggly may come from the older squiggle, which originally meant “to work wavy or intricate embroidery,” according to the OED, before it came to mean, more commonly, “to squirm and wriggle,” or “to move about like an eel.”

svengali ~ noun : a person who manipulates or exerts excessive control over another

“’I’m glad Zvengali‘s back where he belongs.”

Rudyard Kipling, A Diversity of Creatures, 1917

A Svengali is “a person who, with evil intent, tries to persuade another to do what is desired,” and is named for Svengali, “the hypnotist villain” in the 1894 novel Trilby by George du Maurier. Kipling’s is the first recorded figurative use of Svengali. In the quote, the speaker is referring to “a dog with a mesmeric stare,” says the OED.