Home » Channel Islands » A Shipwreck and a lot of Wine and Laughter : Guernsey gets Merry

A Shipwreck and a lot of Wine and Laughter : Guernsey gets Merry

There may yet still be some people who can remember the strange wreck of a ship on the rocks at Albecq on October 1st 1937, the result of which caused a lot of drinking, laughter and general merryment.

The 3,330 ton French ship Briseis was en route from Oran to Rouen in Normandy carrying a cargo of wine and spirits. when on the 1st October 1937 she struck a reef known as Les Grunes off of the West coast of Guernsey. 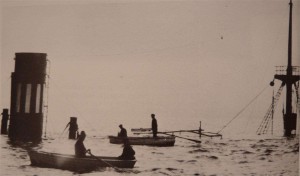 After she had struck, the captain stopped the engines and then re-started them in order to try and pull her off of the rocks she was fast against. His intention was to try and reach as far as Vazon’s sandy beach where he hoped to beach her and so save the vessel.

No-one knows for sure but perhaps the steering gear was damaged because instead he found himself amongst the rocks at the end of the point at Houmet. As it turned out this was most fortuitous because the ship sank before hitting a rock with no loss of life.

Soon, a great crowd of people arrived to find out what had happened. There were hundreds of them along the coast, attracted by the non-stop noise of the ship’s siren.

By this time, all could see that the bow was well down in the water and that the stem was beginning to rise into the air. Suddenly the bow slid under water and at the same time the boilers burst and sent water and steam up into the air. The ship sank completely – there were only the tops of its chimney and masts which showed above the sea.

They must have thought that Christmas had come early that year!

As soon as the ship began to break up, the barrels of wine and spirits floated along the beach and onto to the sand. There were hundreds of them and those who were watching rushed down the beach to “save” the barrels. They must have thought that Christmas had come early that year! When the captain of the Briseis, Leon Le Hellidu, realised that the ship was sinking, he had ordered the crew to abandon ship and they all climbed into the small boats. A little later fishermen arrived in their boats and towed the survivors to Grand Havre. It appears that the vessel sank in about 70 ft of water at a time when there was only six feet of water over the Grunes when it struck.

All this time, though the barrels coming ashore were tapped on the beach amongst the rocks and people drank the wine there or filled bottles, cans – anything in which could they could carry the wine home, even (it was said later) chamber-pots!

The scenes on the beach were merry & chaotic to say the least and inevitably many people drank far too much. There were even some who fought each other. Others who had more sense took their barrels home and hid them where they could and they had some wine for years to come. Although, it must be said that the wine was not of the best quality.

As soon as possible the authorities published an advertisement about the ships cargo. Everything found on the beach or floating in the sea had to be declared to the States’ Supervisor. There had been almost 300 barrels of Algerian wine on board but, predictably, only a few were ever declared. Some were found near St. Martin’s point; others near Sark, to the north of the island and beyond. Most however found their way down the throats of the islanders lapping up this unexpected windfall!

With time, as the ship broke up, other barrels floated ashore. These were smaller than the others and contained much stronger liquor. When they were tapped, it wasn’t wine that was in these little barrels but a strong spirit which really pleased the “boys” and there were a lot of people who had headaches for a time after the disaster.