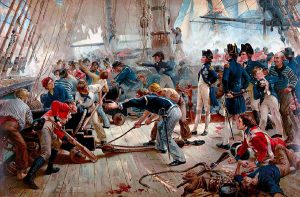 The Battle of Trafalgar was to witness both the defeat of Napoleon Bonaparte’s plans to invade Britain, and the death of Admiral Lord Nelson. It was never going to be any ordinary battle, and quickly acquired a heightened, almost magical, reality.

21st October 1805 : Atop his column in London’s Trafalgar Square stands one-armed Admiral Horatio Nelson who won a battle and lost his life on on this day in 1805 at the age of 47. 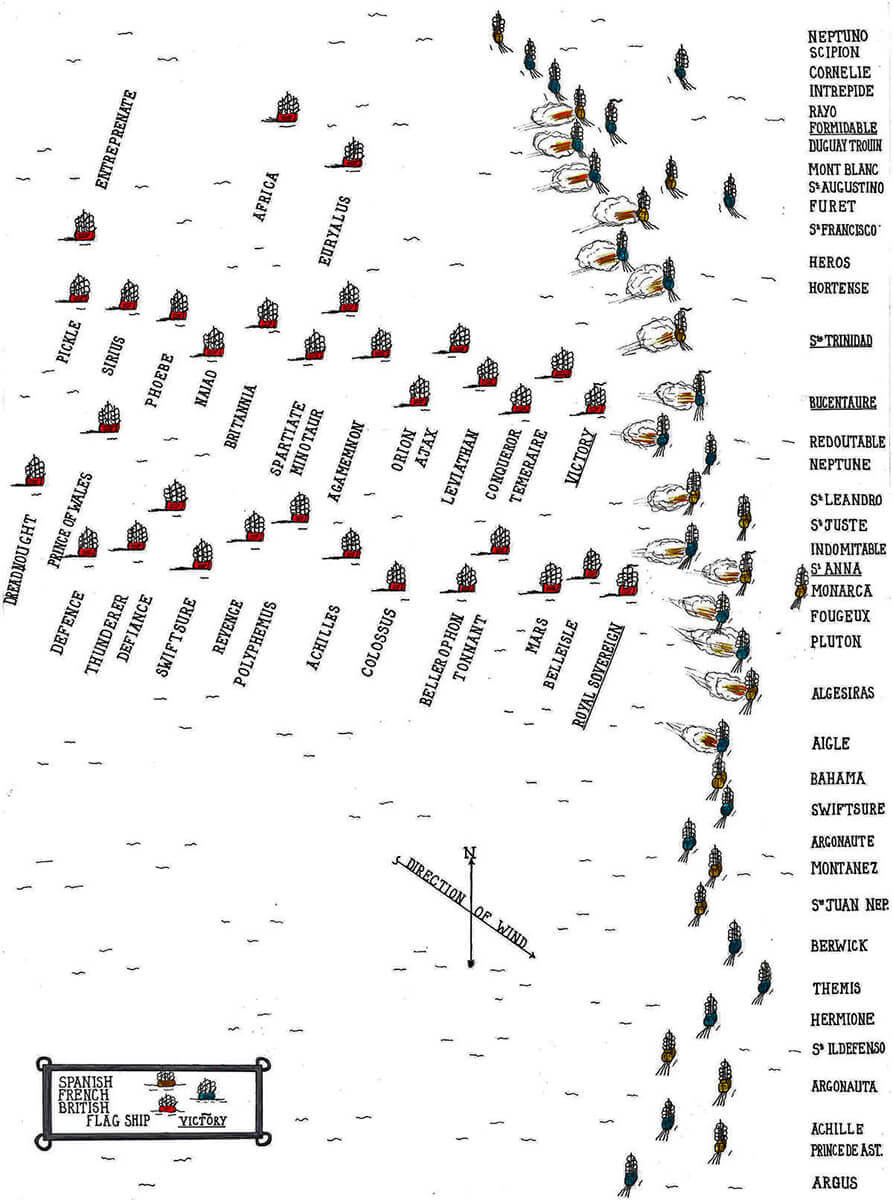 Nelson joined the navy at the age of 12 , so he had been serving for over 20 years before his defining years of greatness during the French Revolutionary and Napoleonic Wars. He lost an eye at Calvi helping to capture Corsica in 1797 and 4 years later his right arm at Tenerife. A year after that he destroyed Napoleon’s fleet at the Battle of the Nile.

Such was brilliant naval career up to the 21st October 1805 Nelson, with only 27 ships, he completely outmanoeuvred a French/Spanish fleet of 33 warships at Cape Trafalgar on the south coast of Spain. It was before this battle that he issued his famous signal, ‘England expects that every man will do his duty .’

Nelson certainly did his. Ordering what amounted to a frontal assault on the French line, Nelson in his flagship Victory led one column of ships directly at and through the French fleet, raking the enemy’s flagship with crippling cannon shot.

Even when Victory became entangled with a French warship, Nelson remained fully exposed to enemy fire, walking resolutely on the quarterdeck with his captain Thomas Hardy. At 1.15 in the afternoon a sniper’s bullet fired from the rigging of an enemy ship caught Nelson in the shoulder, passed through his lungs and shattered his spine.

The Battle of Trafalgar was one of the truly decisive naval encounters in history. The French lost 19 ships and 14,000 men killed or captured, including their admiral. British losses were only 1,500 and not a ship was lost.

In indescribable pain, Nelson was carried below, to survive for another 3 hours. Knowing he was about to die, he beseeched Hardy ‘to take care of my poor Lady Hamilton’ (Nelson’s mistress). At the end he murmured ‘Kiss me Hardy.’ The captain knelt and kissed his cheek, and the great admirial expired, according to legend dying with the famous words ‘Now I am satisfied. Thank God I have done my duty.’ 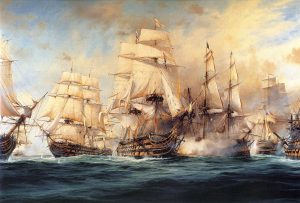 The Battle of Trafalgar was one of the truly decisive naval encounters in history. The French lost 19 ships and 14,000 men killed or captured, including their admiral. British losses were only 1,500 and not a ship was lost. Napoleon’s last hope of invading England had been denied for ever.

Nelson’s body was brought back to England to receive an imposing funeral in St Paul’s Cathedral where he was buried in a coffin that he himself had ordered made from timber taken from the French warship Orient that he’d destroyed at the Battle of the Nile.


It is also with some pride that we can also say that 29 Guernseymen were at Trafalgar that day serving their beloved Admiral Horatio Nelson.