In 1977 one of the most important marine archaeological finds in the British isles was discovered right here in the Channel Islands off of the treacherous coast of Alderney. The find was so great that it is considered second only to the discovery of King Henry VII’s warship the Mary Rose.

Alderney is notorious for its fierce currents and hazardous reefs. Over the centuries these have claimed a hige amount of ships, not least of which was a gunned Elizabethan vessel with a military cargo that was discovered by Alderney fisherman Bertie Cosheril in 1977. 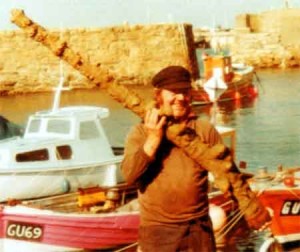 It was in April of that year that Bertie Cosheril found a long concreted object tangled up in the back-line of one of his lobster pots. Several days later Bertie took it to the Alderney Museum whose then curator agreed with him that it was most likely a 19th century shoulder-arm. Back at home he broke away the concretion with a hammer to reveal a musket. Unfortunately the musket no longer survives, but in the photograph opposite you can be seen in its original concreted state on the day it was found.

It wasn’t until some time later Bertie contacted the local dive club who then decided the site was worth investigating. They descended and immediately discovered two cannons and timbers which could be seen‘flapping slightly in the current’.

Selection of Artefacts from the Wreck

Over the next few years several further dives were made during which clay pipes, gaming pieces sounding lead, animal bones, muskets, pan weights and a range of pottery fragments were recovered.

However the discovery and official recognition that it was Elizabethan wasn’t announced to the world until the 26th June 1992 at a press conference. Further research at the Public Records Office, London, had unearthed documentation regarding an unnamed ship which had been ‘cast away about Alderney’ in November 1592. It was carrying dispatches from Lord Burghley to General Sir John Norreys who was the head of an English expeditionary force that was active in Britanny at the time.

Why is it so Important?

The importance of the Alderney wreck lies in the fact that it is the only ship from this pivotal period to be found and excavated in British waters. Archaeologically and historically, it is second in importance only to the Mary Rose, and illuminates better than anything else the crucial years in Elizabeth’s war with Spain

The defeat of the Spanish Armada in 1588 did not end the Spanish threat. Within three years Queen Elizabeth I had sent England’s best known and most experienced soldier, Sir John Norreys, to Brittany with 3000 men to prevent Spain from securing a suitable port from which it might pursue its war against England. The Channel Islands straddled the route between England and Brittany, so most of Norreys’ transports and supply vessels would have passed within the near vicinity of Alderney.

In a letter to Lord Burghley dated 29th November 1592, Sir John mentions “a shypp that was cast away about Alderney”. Because of its location and period and because it was carrying military supplies (helmets, body armour, muskets, shot, hand grenades, etc.), it is believed that our wreck is the ship that was mentioned in the dispatches to the Queen’s Chief Minister.

The Elizabethan Age was a time when England was moving out into the world. Never were its ships more important. Men like Drake, Raleigh, Hawkins and Frobisher fought battles at sea and set out on journeys which, in time, would establish England’s maritime and territorial domination of the world. Upon its ships, England under Gloriana achieved wealth, power and greatness it had never known before.