Home » General Interest » Before Mechanised Transport How Far Could Someone Expect to Travel In a Single Day on Horseback or Stagecoach?

Before Mechanised Transport How Far Could Someone Expect to Travel In a Single Day on Horseback or Stagecoach?

The first thing to note is that speed by coach or horse depended on the state of the roads, the weather, what sort of hurry you were in, and how much money you had.


Travel on horseback was the fastest – for instance, Sir Robert Carey set out early on 24 March 1603 to tell James VI of Scotland of Elizabeth I’s death, and arrived at Holyrood late on 26 March. He stopped to sleep both nights, and changed horses several times. Most people, with just the one horse, would be much slower. 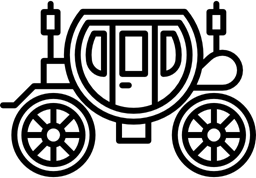 Coach travel was notoriously slow and unreliable since ‘roads’ were just dirt tracks that could often turn very muddy, until the arrival of decent turnpike and macadamised roads. However by the 1830s, the superbly punctual mail coach could get you from Bristol to London (119 miles) in just under 17 hours, making several stops for fresh horses.

That said most folk couldn’t afford a horse or coach travel, but would think nothing of walking distances which nowadays are the stuff of military training. Ten or more miles in a day was no problem for a reasonably fit person, while in the 18th and 19th centuries ‘pedestrians’, who walked prodigious distances at speed for wagers, were sporting celebrities.


Finally its worth mentioning that breakdown assistance was not generally available. If you couldn’t fix it yourself, you relied on help from the locals, or the nearest inn.