Home » History » Beware the Ides of March : The Great Caesar is Assasinated

Beware the Ides of March : The Great Caesar is Assasinated 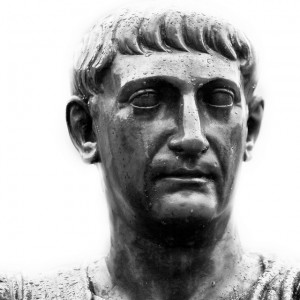 “Beware the Ides of March!”, the augur Spurinna had warned a few days before the 15 March in 44 BC , but the great Julius Caesar had brushed him aside. Was he not, at 55, the most powerful man in the civilised world?

For five years Caesar had been dictator, after having decisively defeated the coalition of nobles, including the great Pompey, who had tried to destroy him. Caesar knew there were senators who hated him, who in fact were plotting to kill him, but so sure was he of his position, of the awe (and perhaps, he hoped, the love) in which he was held, that he had even dismissed the troop of Spanish bodyguards that normally escorted him.

So at mid-morning, on the 15th March 44BC, Caesar set off for Pompey’s theatre, where the Senate was meeting. En route a friend handed him a note with the details of the assassination plot, but Caesar simply put it with the other letters he was carrying, having no time to read it.

Entering the theatre, he saw Spurinna among the crowd. “The Ides of March have come”, he mocked. “Yes”, replied the augur, “but they have not yet gone”. 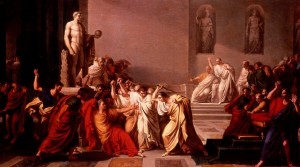 Caesar took his seat, quickly to be surrounded by conspirators who pretended to be paying their respects. One seized him by the shoulder, and Caesar shook him off, but as he turned away one of the Casca brothers central to the conspiracy stabbed him just below the throat. Grabbing Casca’s arm, Caesar stabbed it with his stylus and tried to escape the ring of murderers now surrounding him. But suddenly the great man realised it was hopeless. Since Casca’s first thrust he had not uttered a word, but when he saw his protege Marcus Brutus among his assassins, he murmured in Greek, “You, too, my child?’ He then drew the top of his toga over his face while letting the lower part fall so that he would die with both legs covered. The murderers struck out in a frenzied attack, sometimes wounding each other in their eagerness for the slaughter. Twenty-three knife blows struck home as Caesar stood there, defenceless, before he fell dead to the floor.

So died the greatest of all Romans. But he had changed the world. He replaced the corrupt and incompetent rule of the Roman nobility with an autocracy that lasted for half a millennium in the west and 1,500 years in the east, and he gave to France the Latin civilisation that replaced tribal barbarism and that has lasted to this day.

As for the assassins, virtually all were killed within 3 years of Caesar’s murder or, like Marcus Brutus, committed suicide.

History has a special place for Brutus. Caesar had been his mother’s lover and had helped him all his life, but nonetheless 5 years before the assassination Brutus joined Pompey’s army against Caesar. Even so, Caesar pardoned him and appointed him governor of Cisalpine Gaul. For his treachery, in his Inferno Dante places him in the lowest circle of Hell alongside Judas, hanging from Satan’s mouth.