Columbanus – The Monk Who Saved Europe

You may never have heard of Columbanus, but this radical-thinking monk can be credited with helping to save Europe in crisis after the fall of the Roman Empire.

his first biographer … makes him sound like a monkley James Bond

When you also take in to account comments made by his first biographer, writing 28 years after his subject’s death, he makes him sound like a ‘monkley James Bond’…

“Columbanus’s fine figure, his splendid colour, and his noble manliness made him beloved by all.”

“He aroused … the lust of lascivious maidens, especially of those whose fine figure and superficial beauty are wont to enkindle mad desires in the minds of wretched men.”


Columbanus was born in 543 AD near Mount Leinster in Ireland, 67 years after the ‘official’ estimated end of the Roman Empire in 476 AD.

It was the beginning of a time of decline when western Europe began it’s slide into the dark ages with a rise in barbarism a decline in literacy, technology, and law and order.

If Europe was to survive then lifeboats of learning and knowledge would be needed to survive the storms and dark ages of the coming centuries.

So How Did He ‘Save’ Europe? 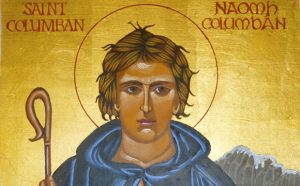 Columbanus studied under Sinell of Cleenish, whose monastery was on an island of the river Erne, in modern Co Fermanagh. He became well-educated in the areas of grammar, rhetoric, geometry, and the Holy Scriptures.

Later he joined the monastery at Bangor under the abbot Comgall and was ordained a priest. It wasn’t until he was aged 51, that he set out with 12 companions, for Europe to become a pilgrim for Christ and a key establisher of these lifeboats of learning.

After a brief stop in Britain, most likely on the Scottish coast, they crossed the channel and landed in Brittany in 585 AD.

There then followed a remarkable journey through Europe where Columbanus and his disciples established over 100 centres of scholarship and spirituality throughout a European continent that was divided after the fall of the Roman Empire. 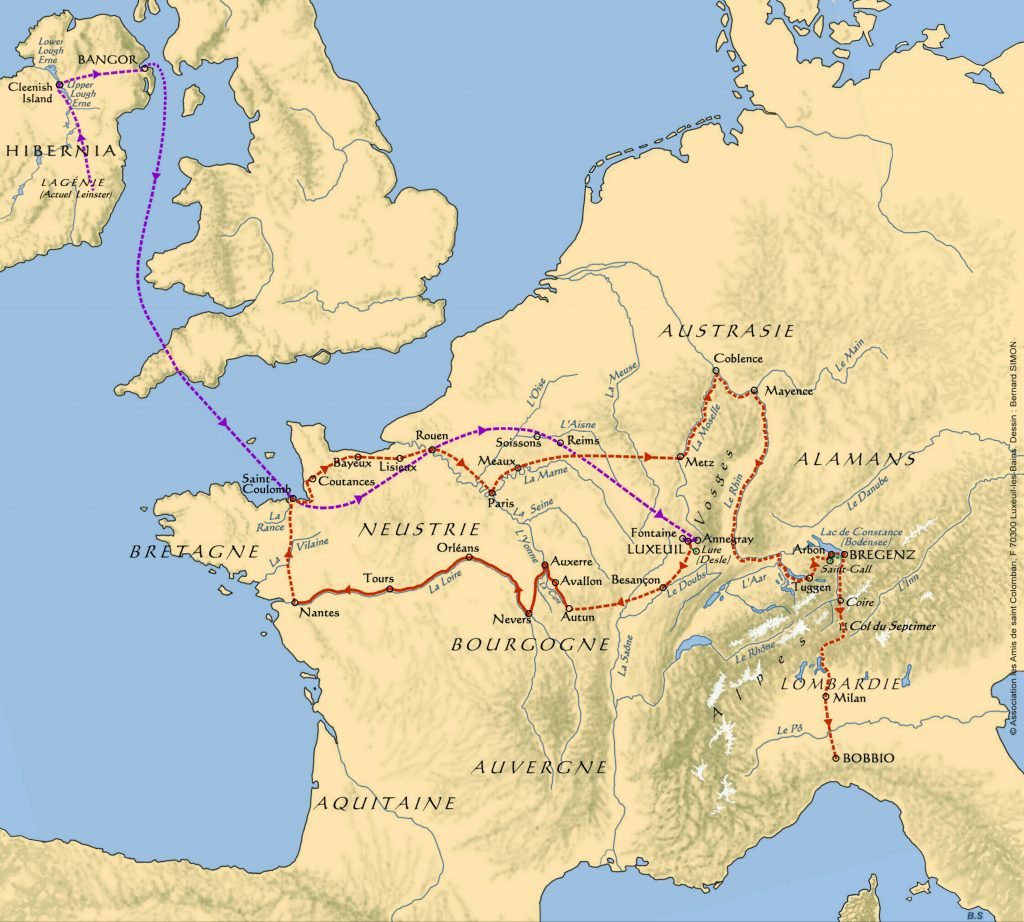 He built the monasteries in Ireland, France, Austria, Switzerland and Italy which went on to become Europe’s first universities. he established a writing system to encourage the spread of liberal values, and risked his life when he demanded high standards of leadership from powerful leaders – bishops, kings and even popes.

He died in 614 AD in Italy and is buried at Bobbio Abbey.


The foundations he laid were to help preserve Western civilisation through the Dark Ages.