Home » History » Charlemagne- The Greatest Emperor Since the Romans ?

Charlemagne- The Greatest Emperor Since the Romans ?

We tend to think of the Dark Ages as a period of unending European misery. A period after the fall of the Roman Empire of cultural and technical stagnation. Even the name “Dark Ages” suggests a fall from grace where society went backwards rather than forwards – in actual fact the ‘Dark Ages’ is only so called because of it’s paucity of written historical records. However there was at least one high point when hundreds of years before the Renaissance would even begin humanity in Europe raised it’s head out of the ‘darkness’ to witness something truly remarkable.


IN BRIEF : The Man and his life

Thursday April 2nd 742 a baby boy was born and duely christened Charlemagne. What no-one could have known at the time though was that little boy would go on to become arguably the greatest emperor since the Romans.

Charlemagne was the grandson of the great Frankish leader Charles Martel – the very same man who, in Spain, defeated and pushed back the Islamic Moorish incursion that threatened to overrun all of Europe. he became joint King of the Franks along with his father and brother when he was only twelve. After the other two had died he asserted his power over all the Frankish lands, comprising present-day northern France, Belgium and western Germany.

Then, over the next 30 years, he subjugated the Saxons, seized Bavaria, fought campaigns in Hungary and Spain and conquered parts of northern Italy. Backed by the Pope (and strongly supporting the Pope in a time of great conflict with the eastern empire in Constantinople), Charlemagne created one vast empire of practically all the Christian lands of western Europe except parts of Spain, southern Italy and the British Isles. He established his capital at Aachen (Aix-la-Chapelle) on the right bank of the Rhine. 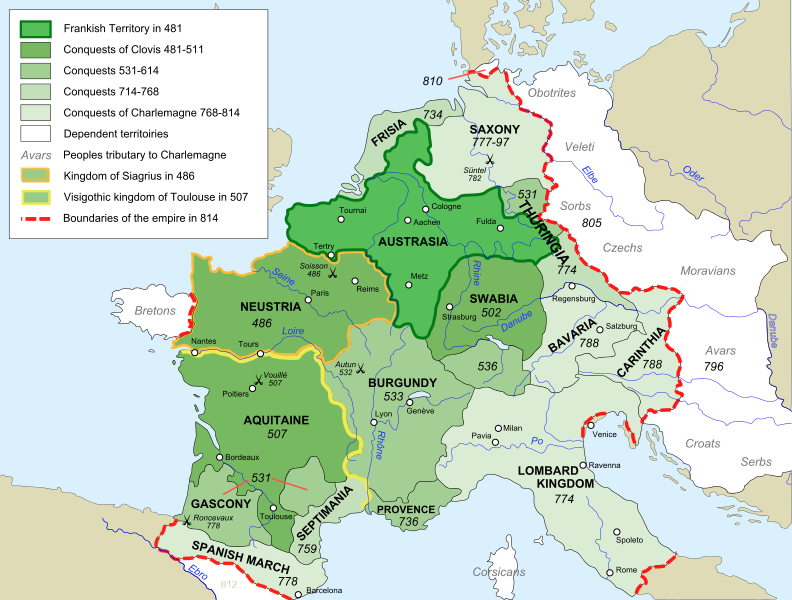 One contemporary at Charlemagne’s court described him thus:

‘He had a broad and strong body of unusual height, but wellproportioned; for his height measured seven times his feet. His skull was round, the eyes were lively and rather large, the nose of more than average length, the hair grey but full, the face friendly and cheerful. Seated or standing, he thus made a dignified and stately impression even though he had a thick, short neck and a belly that protruded somewhat; but this was hidden by the good proportions of the rest of his figure. He strode with firm step and held himself like a man; he spoke with a higher voice than one would have expected of someone of his build. He enjoyed good health except for being repeatedly plagued by fevers four years before his death. Toward the end he dragged one foot.’


IN BRIEF : His Legacy 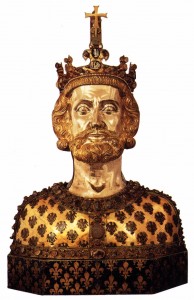 This was the man who founded the Carolingian dynasty that ruled an empire for 137 years. So much was he admired that a century after his death the Emperor Otto I emulated the great conqueror by establishing Aachen as his capital, and during the next 600 years more than 30 Holy Roman Emperors and German kings were crowned there.

Charlemagne also appears in several French chansons de geste (literally ‘songs of deeds’) of the Middle Ages, most famously in Le Chanson de Roland where he is portrayed leading the Christian fight against the Muslims (or Moors) of Spain.

In 1165 the then Emperor Frederick Barbarossa paid Charlemagne the ultimate compliment in badgering the Pope Paschal III to canonise him. Unfortunately for Charlemagne, Paschal was an anti-pope, claiming to be Pope but unrecognised by the Catholic Church in Rome, so the Church has never accepted his canonisation.