Home » General Interest » Do Animals have a built in compass ?

Do Animals have a built in compass ? 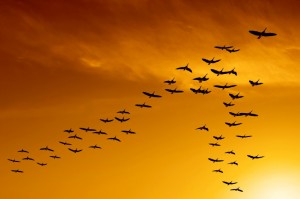 For years there have been experimental results suggesting that birds use the Earth’s magnetic field to navigate. In the northern hemisphere, birds fly north in the summer to breed in the Arctic and south in the winter to warmer regions. But nobody has been sure how this ability works. Concentrations of magnetic particles have been found in bird skulls, but with no apparent connection with any sense organs, and so it’s difficult to see how these could be part of a navigation system.

A group of scientists in Oxford and the USA recently came up with a theory that shows how ingenious nature can be in solving problems that improve survival. Their proposed system has nothing to do with magnets in the head but instead depends on short-lived molecules whose lifetime depends on the surrounding magnetic field.

The scientists suggested, (note the word suggested!), that there are molecules in the light receptors in a bird’s retina that undergo a chemical reaction when they absorb light. This reaction creates showers of particles which survive for about a millionth of a second. But the precise survival time, and therefore the numbers still around after a certain interval, is affected by the Earth’s magnetic field. Somehow, the scientists believed, a sensory system in the bird’s retina monitors these molecules and how long they live, and uses the results to set its direction of flight.

However, there were two problems with this theory. First, no one has found any evidence for this system in the physiology of bird vision. And second, nobody had seen a molecule that behaved in this way. In 2008, the second problem – at least – was solved, when scientists reported that they had synthesized molecules in the laboratory which were similar to those used in bird vision, and which behaved in just this way in a magnetic field.

In the same year, another strange discovery about animal magnetism was announced. This time, no complicated laboratory equipment was needed In fact, anyone could have made the discovery since all it involved was studying pictures on the Google Earth website.

German scientists who had shown that some small rodents are sensitive to the Earth’s magnetic field wondered whether larger animals were also able to detect such fields. They considered the migration patterns of herds of cattle or deer – difficult to herd into the laboratory – and hit upon the idea of using satellite imagery, freely available on the Internet, to hunt for herds and work out the direction they were facing.

They surveyed images of more than ten thousand cattle around the world and found that the animals tended to face north or south. What’s more, it was magnetic north or south, which varies slightly from geographic north and south, defined by the position of the north and south poles. One of the problems with scientific experiments, particularly when you know what you are looking for, is what’s called observer bias. However hard you try to be objective, if you are trying to judge what direction a particular herd is facing, particularly when you know which direction you’d like them to be facing, it’s easy to introduce bias into the results. To try to remove this factor, the scientists assigned university students to analyse the same set of images and they came up with the same result.

No one knows why cattle and deer prefer to face north or south, but the scientists pointed out that if this is a general preference, it might be worth taking it into account when building cowsheds. If contented cows produce more milk, discontented cows forced to face east-west might produce less.