The Science of Aging – Why do we age at all ?

While many search for the elusive Fountain of Youth, you might be wondering, Why do we age in the first place? What is it about our bodies or cells, biologically, that causes us to grow old?

The Rate of Ageing

A variety of internal and external factors such as diet, exercise, and environmental stress contribute to cell damage and repair, and affect the rate of aging.

The surprising truth is that, apart from the causes listed above, we actually have a biological clock buried within our genetic makeup. And this clock can only run for so long—in other words, we’re programmed to die.

It’s the Your body is made up of trillions of cells, which are constantly going through cell division. And every time they divide, they make a copy of their DNA. This DNA is tightly packed into structures called chromosomes, of which humans have 23 pairs.

The problem is, DNA replication isn’t perfect and skips over the end of each chromosome. To protect important DNA information from being cut out, we have something called telomeres on the ends of chromosomes. These are essentially meaningless repeats of DNA that we can afford to lose.

But every time your cells divide, the telomeres become shorter and shorter, until eventually they’ve been entirely stripped away. At which point, the cell no longer divides.

Some flatworms are able to endlessly regenerate their telomeres, making them effectively biologically immortal. But their life spans do vary, and they’re still susceptible to disease, further suggesting that aging is a mix of genetic and environmental factors.

But Why Does it Happen at All ?

Ultimately, the replication limit actually helps to prevent cancer, which is the uncontrollable growth of cells and evasion of cell death.

In humans this replication limit is around 50 times

The point at which a cell stops replicating is known as cellular senescence. In humans, this replication limit is around 50 times.

Once it’s reached, the cell gradually begins to lose its function and dies, causing age-related characteristics. 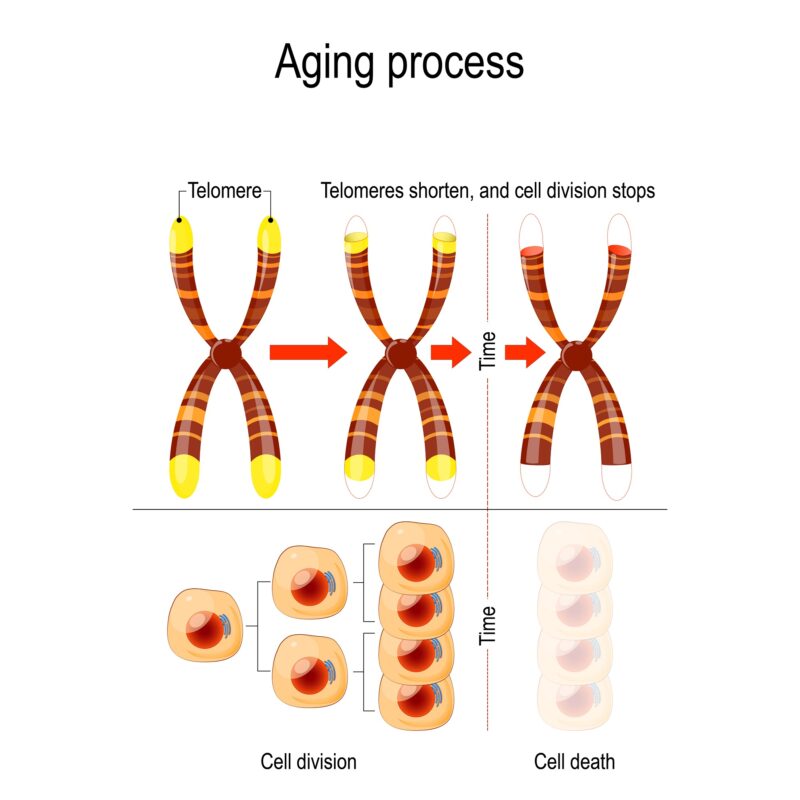 This also helps to explain why life expectancy is a strongly heritable trait from your parents—because you got your initial telomere length from them.