Home » Science » Your Brain is Amazing but Who Are You? What is Your Reality? How do You Decide?

Your Brain is Amazing but Who Are You? What is Your Reality? How do You Decide?

Youre human brain is nothing short of amazing! Made up of billions of neurons that communicate in trillions of connections it’s one of the most complex and fascinating organs in your body.

It’s not just a bunch of cells though – it’s the vessel that is intrinsically YOU – it houses your thoughts, hopes, dreams, desires, your personality, your very consciousness itself!

In this article we look at some of the amazing and awesome aspects of the brain – effectively asking some deep questions – Who Am I, What is Reality, How do I Decide?

Across the animal kingdom many animals are strikingly independent soon after they’re born – we are not!

At birth humans are helpless. We spend about a year unable to walk, about 2 more before we can articulate full thoughts, and many more years unable to fend for ourselves. We are totally dependent on those around us for survival.

On the face of it, this seems a great advantage for other species – but in fact signifies a limitation. Baby animals develop quickly because their brains are wiring up accordingly to a largely pre-programmed routine.

In contrast, humans are able to thrive in many different environments. This is possible because the human brain is born remarkably unfinished.

Many animals are born genetically pre-programmed, or ”hardwired” for certain instincts and behaviours. Humans are not.

As many as 2 million new connections, or synapses, are formed every second in an infant’s brain

At birth, a baby’s neurons are disparate and unconnected, and in the first 2 years of life they begin connecting up extremely rapidly as they take in sensory information. As many as 2 million new connections, or synapses, are formed every second in an infant’s brain. By age two, a child has over 100 trillion synapses, double the number an adult has.

The human brain comes into the world with some amount of hardwiring (eg breathing, crying, suckling, caring about faces, and an ability to learn their native language). But compared to the rest of the animal kingdom, human brains are unusually incomplete at birth.

This is to our advantage, throughout our childhoods it helps us to livewire our brains ‘on-the-fly’ to our environment, our culture, our experiences & circumstances – we can literally physically change our brains to learn new things. It has allowed our species to take over every ecosystem on the planet and begin our move into the solar system.

The process of building a human brain takes up to twenty-five years. The massive changes over this time can also explain why your cute little boy or girl can turn overnight into a grunting, hulking, teenage troglodyte! 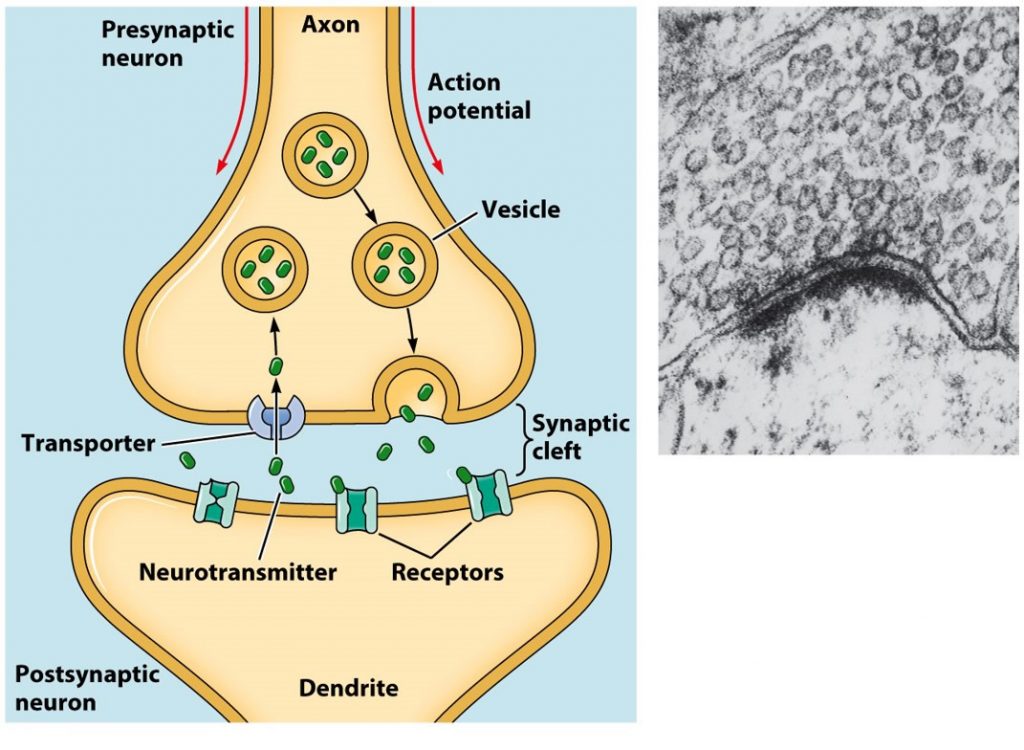 The teen years are a period of such important neural reorganization and change that it dramatically affects who we seem to be. Hormones coursing around our bodies cause obvious physical changes as we take on the appearance of adults – but out of sight our brains are undergoing equally monumental changes. These changes profoundly colour how we behave and react to the world around us.

A mature pleasure-seeking system coupled with an immature orbitofrontal cortex means that teens are not only emotionally hypersensitive, but also less able to control their emotions than adults.

These changes lead us to be more self-conscious, more risk-taking, and more prone to peer-motivated behaviour. For frustrated parents the world over, there’s an important message: who we are as a teenager is not simply the result of a choice or an attitude; it is the product of a period of intense and inevitable neural change.

By the time we’re 25 the brain transformations of childhood and adolescence are finally over. However ‘who we are as adults’ is not fixed in place or immoveable. In adulthood our brains continue to change. It can still be shaped – and can hold that shape – we can say that it is as plastic. Even in adulthood experience changes it, and it retains the change.

These indelible, microscopic impressions accumulate to make you who you are

Your family of origin, your culture, your friends, your work, every movie you watched, every conversation you have all leave their footprints in your nervous system. These indelible, microscopic impressions accumulate to make you who you are.

Brains are like snowflakes – no two are physically the same. Everything contributes to a continual reshaping of the neural networks that we can say is the essence of “us”. So who exactly are you? Is there anyone deep down, at the core?

So what about consciousness. Scientists know a lot about the mechanics of neurons and networks and brain regions – but they don’t know why all those signals coursing around in there mean anything to us. How can the matter of our brains cause us to care about anything?

This “problem of meaning” is not yet solved – and may never be solved. Maybe its’ the divine spark that simply makes us, us ? Maybe its our very essence of being!

BUT the brain has no access to the world outside. It’s sealed within the dark, silent chamber of your skull, your brain has never directly experienced the external world, and it never will.

The only one way that information from out there gets into the brain is via your sensory organs – eyes, ears, nose, mouth, and skin. They detect photons of light, air compression waves, molecular concentrations, pressure, texture, temperature and translate them into the common currency of the brain: electrochemical signals.

So how does the brain put it all together to form some sort of experience of reality ?

Putting it All Together

So somehow your brain collects up all the various bits of information lighting up different parts your brain and it decides upon a story of what is happening – it give you a holistic sense of reality or of being.


So how can we tell that your reality is the same as mine ?

Is Your Reality My Reality?

In a nutshell it’s impossible to tell if your reality is the same as mine.

However there’s a small fraction of the population whose perception of reality is measurably different to ours – those who have a condition called synaesthesia. (see our article Synesthesia – Can you Really “Hear” a Flash of Light )

Some taste words. Some see sounds as colours

Synaesthesia is a condition in which senses (or in some cases concepts) are blended. There are many different kinds of synaesthesia. Some taste words. Some see sounds as colours. Some hear visual motion. About 3% of the population has some form of synaesthesia.

Synaesthesia is the result of cross-talk between sensory areas of the brain, like neighbouring districts with porous borders. Synaesthesia shows us that even microscopic changes in brain wiring can lead to different realities.

WHO IS IN CONTROL ?

Who exactly is steering the ship ?

LiveWiring – Burning Skills into the Brain

When we practice new skills, they become physically hardwired, sinking below the level of consciousness. This is often referred too as “muscle memory” – they are in fact stored in the brain. Things we do automatically like riding a bicycle or tying shoelaces.

Through practice, repeated signals have been passed along neural networks, strengthening synapses and thereby burning the skill into the circuitry.

As a skill becomes hardwired, it sinks below the level of conscious control. At that point, we can perform a task automatically and without thinking about it. In some cases, a skill is so hardwired that the circuitry underlying it is found below the brain, in the spinal cord.

There is a consequence to this automization: new skills sink below the reach of conscious access. You lose access to the sophisticated programs running under the covers, so you don’t know precisely how you do what you do – like walking up a flight of stairs.

All this automation then frees you up to learn even more new things and have conscious thoughts like reading this article.

HOW DO I DECIDE THEN ?

Our days are made up of thousands of small decisions: what to do, which way to go, how to respond, whether to partake. Your brain is like a neural parliament, composed of rival political parties which fight it out to steer the ship of state.

But how do you decide say, on one day at the supermarket that you’d like tomato soup and on another you want chicken soup?. On the face of it it’s a completely arbitrary decision – especially if most of your body is running all this automation without any conscious control, how do I then manage to decide anything at all ?

It’s All About the State

Emotions do more than add richness to our lives – they’re also the secret behind how we navigate what to do next at every moment.

The physical signals from the body give a quick summary of what’s going on and what to do about it. To land on a choice, the body and the brain have to be in close communication.

The state of your body helps you in this task: it serves as a summary of the situation. Your physiological signature can be thought of as a low-resolution headline: “this is bad” or “this is no problem.” And that helps your brain decide what to do next.

In most situations, physiological signals are more subtle, and so we tend to be unaware of them. However, those signals are crucial to steering the decisions we have to make.

We saw above that you can make decisions by using an instinctive body state. You will match this state against previous remembrances of states like it and whether the outcome was good or bad.

But you need to continually refine this “memory bank of states”. You need to compare the actual decision made with what you predicted the outcome would be when you chose it. In other words you need to look at any prediction errors that may have occurred.

Tracking these ‘prediction errors’ is the key to effective learning : the ·difference between the expected outcome of a choice and the outcome that actually occurred.

How does this work? There’s a tiny, ancient system in the brain whose mission is to keep updating your assessments of the world. This system is made of tiny groups of cells in your midbrain that speak in the language of a neurotransmitter called dopamine.

When there’s a mismatch between your expectation and your reality, this midbrain dopamine system broad- casts a signal that re-evaluates the price point. This signal tells the rest of the system whether things turned out better than expected (an increased burst of dopamine or worse (a decrease in dopamine). That prediction error signal allows the rest of the brain to adjust its expectations to try to be closer to reality next time. The dopamine acts as error corrector: a chemical appraiser that always works to make your appraisals as updated as they can be.

There are many many more fascinating things about the brain – too many to mention in a short(ish) article like this.

If you want to read more we can heartily recommend David Eagleman’s book “The Brain : The story of you” from which this article was mostly written.