Home » General Interest » Does any other Animal ‘Speak’ or Communicate like Humans?

Does any other Animal ‘Speak’ or Communicate like Humans?

Chimpanzees share about 99% of our DNA, making them our closest living relatives, so the questions might be better re-phrased as “Can chimps speak?“

Maybe not ‘speak’ but communicate by sounds – yes. British researchers at the University of St Andrews have discovered that chimpanzees make meaningful sounds to ‘talk’ to each other.

Researchers recorded the grunts produced by two chimps as they sampled bread and apples from two dispensers. She then played the recordings separately back to another chimp, who spent far more time fishing around the apple dispenser when he heard an ‘apple’ grunt, and more time poking in the bread dispenser when he heard a ‘bread’ grunt. The fact that this animal responded similarly to the grunts produced by two different chimps suggests that they are using referential communication.

They have since carried out similar experiments on wild chimpanzee groups in Uganda, which have shown that the animals can similarly discriminate between different types of ‘scream’ produced by members of their troop. For instance, they pay much more attention to screams elicited by an animal facing aggression from another individual than to the sound of one just having a tantrum. So not much different from a human in that respect then …


Other ways to Communicate : Getting a back-scratch that hits the spot 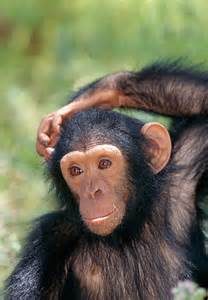 It would also appear that Chimpanzees, like humans, know how to direct each other to hit the right spot during a back-scratch. Previously only humans were thought to use gestures to direct the behaviour of others, because to do so requires the recipient to be able to infer the signaller’s meaning – an ability linked to cognitive capacity. But now other researchers, againfrom the University of St Andrews, together with John Mitani from the University of Michigan, have found evidence that, at least when it comes to a back-rub, wild chimps can do it too.

The researchers watched male chimpanzees grooming each other in the Kimbale National Park, Uganda. To direct a grooming partner to pay more attention to a neglected area, the chimp being groomed would scratch a certain spot on itself in an obvious and exaggerated manner. Most of the time the groomer would promptly start paying attention to precisely the spot the gesturer had just indicated. This form of referential communication, such as pointing to something in the environment with the expectation of a specific response from another, say the researchers, had previously been considered beyond the capability of non-human primates in the wild.